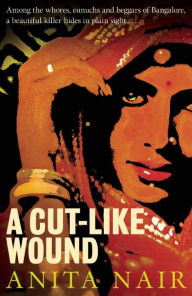 Borei Gowda is a brilliant detective whose personal liabilities have derailed his career. He is not a strong people person. He rankles his superiors, intimidates his subordinates, and works hard to close difficult cases involving marginalized people–the kind of cases that do not attract the attention of those who could help one advance.

Stuck in a small station in Bangalore, India, he lives mostly alone. His son is a college student and his wife has moved to the college town to take care of him. They are still married, but it is not a strong relationship. When his girlfriend from college returns to Bangalore after years of living out of the country, his emotions are put in turmoil.

Detective Santosh is new to the station and eager to learn from this legendary, albeit troubled, detective. He is green. Very green. Still, he has an eye for detail and catches a clue that ties two seemingly unrelated murders to each other. One body has been burned, but prior to being set on fire the man was strangled with a garrotte embedded with glass, glass which cut into the throat and likely would have made him bleed out anyway. Another case earlier had a very different victim found in a very different location who had not been burned–but had also been strangled/cut by the same type of weapon. More bodies turn up with similar wounds and Gowda remembers a case from earlier in his career that bore this mark. Is Bangalore being targeted by a serial killer?

Nair’s book features a damaged protagonist who is confronting a midlife crisis. His relationships with his wife and son are poor, largely from his own neglect of them. His career is stalled. His body no longer carries the tone of his college athlete days, but instead shows the telltale bulge of someone who drinks too much and exercises too little. Still, his mind is sharp, his passion for solving a difficult case is undiminished, and his willingness to do whatever it takes to catch the perpetrator drives him past his own challenges.

Nair also shines a spotlight on some of India’s forgotten people. Much of the story involves Bangalore’s transvestite/transgender community. Living in the shadows, shunned by respectable people, often forced into prostitution to get enough money for food and shelter, these people are considered almost non-people by many in the police force and the broader community. Gowda sees them. He listens to them. He cares about them. If they are victims of a crime, he will not ignore it. But if they are perpetrators of a crime, he will come after them. I won’t claim that this book tries or succeeds in avoiding all stereotypes of this community. It does, however, at least acknowledge their humanity and their complexity as people who face challenges stemming from their very identity.

Cut Like Wound is a police procedural, but it is also a trip through a Bangalore that is multiethnic, filled with people of different religions, highly successful and tragically tawdry, with people who are as honest and corrupt, as industrious and lazy, as kind and as cruel, as people anywhere else in the world. I’m ready to visit, though I do hope someone like Gowda is there to keep the peace! 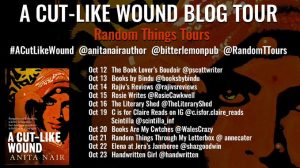 Our thanks to Anne Cater of Random Things Blog Tours and Bitter Lemon Press for our copy of this book, given for our participation in this blog tour. For other perspectives, check out the bloggers who are also posting. The opinions here are solely those of Scintilla.

One thought on “Blog Tour: Cut Like Wound, Anita Nair”