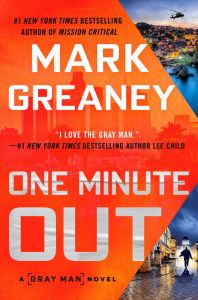 Thriller: One Minute Out, Mark Greaney

I really cannot get enough of the Gray Man.

Court Gentry is a killer. Recruited and trained by the CIA, for years he conducted Black Ops for American intelligence. Betrayed and then hunted by the CIA, he went dark and used his talents to end bad guys. Often he was hired by one set of bad guys to take out another set of bad guys, but he never killed innocents, he never shot dogs, he never hurt children, and he only took jobs that let him go after criminals and other evil persons.

Now, having reached an uneasy accommodation with the CIA, Gentry is taking fewer freelance jobs. But when the opportunity is given to violently end the retirement of a general guilty of war crimes during the Balkans Wars, he cannot pass it up.

Things take a seriously unexpected turn, though, when he launches his assault. The general is not simply retired. He is involved in a human trafficking ring. No longer a leader, he is simply one part of the “pipeline” which smuggles girls and young women into sexual slavery. And Court being who he is, cannot simply walk away from these victims who need help.

Pairing up with the sister of one of those women, Court follows the tracks of the pipeline through Europe and to America. Discovering that the “Consortium” has corrupted and co-opted police and officials throughout small towns in Europe was troubling. But when he discovers that the Consortium’s reach extends to the CIA itself, things become even more dangerous and complex.

The Gray Man thrillers are terrific. Court Gentry is ordinary and extraordinary. Not much to look at, of average height and average looks, able to blend into any crowd and become essentially invisible, he is a myth and legend, a bogeyman whose tales are told to scare mobsters and smugglers and tyrants. Unlike James Bond, he does not keep a girl in every city. He seldom wears a suit and doesn’t own a tuxedo. There is no “Q” supplying him with high tech gadgetry. He buys (or steals) average looking cars or motorcycles or boats. But he is smart, resourceful, and deadly. He has few if any friends. As an ally he is second to none. As an enemy he is unstoppable.

Greaney allows Gentry the usual mayhem and heroism, acquisition of unlikely partners and danger from unexpected directions. He also spends more time evaluating the moral ambiguity of a noble killer. There is also a bit more humor and self-awareness in this novel than in some of the others. Gentry evaluates his life rather unsparingly when he observes,

At times like this I can’t help but wonder if I should have gone to college.

Fans of Mark Greaney and of thrillers in general will enjoy this return trip with the Gray Man. Despite its length, I inhaled most of it in a single afternoon. Greaney’s thrillers leave readers in a breathless chokehold, killing time with lustful abandon and slaughtering evil boredom without remorse. Enjoy the ride, and always remember Gentry’s parting words of wisdom: “Hope isn’t a strategy, but sometimes it’s all you’ve got.”