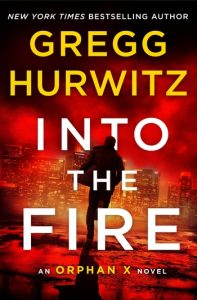 Evan Smoak, aka Orphan X, aka The Nowhere Man, has had enough. He wants to find out what a normal life is like. He wants to retire and find out whether he has only been running from his past or whether he is actually running toward a future. However, he has given a mission to the last person he helped: give my number to one person who needs my help. Therefore he knows he has a final mission.

After that, he’s done.

Max Merriweather was the embarrassment of the Merriweather family. Unlike his cousin, Grant. Grant was a successful accountant, husband, father. He had it all. Owned his own company. Drove expensive cars. Wore expensive suits. Took expensive vacations. Lived in an expensive house. Whereas Max was a divorced contractor living in a seedy apartment. Max did not get invited to the family gatherings. Grant hosted them.

So when Grant turned up at his apartment one day and asked him to keep an envelope for him, Max was not sure what to do. His cousin had never asked him for anything before. Now, Grant wants Max to hold onto this envelope and turn it over to a specific reporter if Grant should die. Reluctantly, Max agrees.

And Grant is tortured, murdered, and Max is on the run. A chance encounter provides him with a phone number. The voice that answers offers to help. And the adventure begins.

For the thriller fan in me, the Orphan X novels offer everything. Although they don’t travel the globe the way some do, Los Angeles is a world unto itself and Gregg Hurwitz uses it lavishly. Evan Smoak is one of those ubermen who can do almost everything. He fights (and kills) hand-to-hand, he is an expert shot, he can blend into a crowd but when the pressure is on he stands up and stands out. Action, adventure, a hint of romance, helping the underdog survive and triumph. I love the novels for their thriller core.

I don’t think that is the only reason I find them so enjoyable. Evan Smoak may be the most introspective and reflective killer you would ever care to meet (assuming you’re not a bad person he is about to end). He recognizes his OCD for what it is: a coping mechanism to maintain a facade of order in a life of chaos. He longs for normal relationships with his “niece,” with the lovely woman and her son who live in his building, even with some of his former clients. He can put on a cloak of normalcy, but it never really fits him well. Being raised to become a weapon, trained from childhood to be an assassin, nurtured to change the world one killing at a time, is going to hurt your ability to interact with the world. Evan realizes this about himself, and wonders often whether he is defined forever as The Nowhere Man or whether there is a possibility for a life as just Evan.

I doubt that I am giving much away by saying that Orphan X does live to fight another day…if it comes to that. Retirement is still on the table at the end. He does not ask Max to give out his number. Still, he keeps the phone, and at the end of the book it does ring. The Nowhere Man may have another mission yet to come. I hope so.

Book Review: Out of the Dark, Gregg Hurwitz