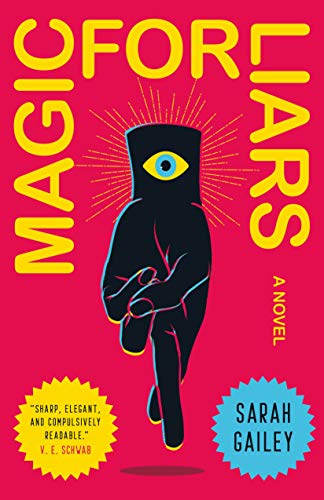 Ivy Gamble has been a private investigator for 14 years. Typically her day consists of following suspected adulterers. It’s a fairly boring and predictable job, although occasionally things go sideways and she has a gun pulled on her. Or a knife stuck into her shoulder. Although that was sort of an accident. The guy was trying to get away and he stumbled into her. While holding the knife. Yeah, it hurt.

Although Ivy is a very ordinary young woman doing a slightly not-ordinary job, she is not a mage. Her twin sister Tabitha is a mage. Ivy and Tabitha seldom see each other, do not really get along well, and Ivy wants nothing to do with the realm of magic and the world of mages.

When a teacher dies horrifically at the Osthorne school where Tabitha teaches, the headmistress decides she needs to hire a private investigator. Since there are few (if any) mages who are also private investigators, she decides that an ordinary investigator who has a familiarity with the magical world is the next best thing. Ivy is hired and though she is reluctant at first, the money and the challenge pull her in.

The challenges in finding the truth are extraordinary. Literally. Ivy’s connection to the magical world is tenuous and dated, limited to long ago conversations about it with her sister when they were children. The students at the school have significant powers. So do the teachers. The only powers Ivy has are her experience and intelligence. Are those enough to find the truth behind the teacher’s death? Are they enough to see behind the lies told by people who can manipulate reality as it suits them?

Sarah Gailey is an award winning author. They have published numerous shorter pieces, but this is their debut novel. It is not a perfect novel, but it is really, really good. I will let others dissect its flaws. I want to celebrate its magic. Gailey has created an interesting world. This is not a Hogwarts set in California, and Ivy is no Muggle (or Squib). Ivy is a flawed adult who drinks too much, whines too much, is self-absorbed and afraid of commitment, and who still manages to conduct investigations that get results. She is afraid of her sister’s power and jealous of it as well. She is angry that her sister could not cure their mother, angry that her sister left her behind when she went to study magic, and longing to connect to the twin she loved when they were young. This complex and confused person is someone I could relate to, someone trying to be honest with herself and not always liking what she sees. The plot was almost secondary to the relationships between Ivy and Tabitha, and between Ivy and herself.

We may not have magical powers, but every one of us wears different faces in different places. We have our work face and our home face, our child face and our parent face, our friend face and our lover face. This is not necessarily hypocrisy. We are social creatures who are malleable in order to fit different social roles. People who cannot transform themselves in this way are diagnosed with various syndromes: autism or sociopathy or other antisocial disorders.

Gailey has done a masterful job of capturing this essentially human condition in their book. Magic for Liars has an interesting mystery, mixed up with a magical fantasy, held together by a fierce and vulnerable protagonist. It is well worth the read.

Hugo Award Winner and Bestselling author Sarah Gailey is an internationally published writer of fiction and nonfiction. Their nonfiction has been published by Mashable and the Boston Globe, and they won a Hugo award for Best Fan Writer. Their most recent fiction credits include Vice and The Atlantic. Their debut novella, River of Teeth, was a 2018 Hugo and Nebula award finalist. Their bestselling adult novel debut, Magic For Liars, was published in 2019; their latest novella, Upright Women Wanted, was published in February 2020. Their Young Adult novel debut, When We Were Magic, came out in March 2020. You can find links to their work at www.sarahgailey.com; find them on social media @gaileyfrey.

Book Review: When We Were Magic, Sarah Gailey