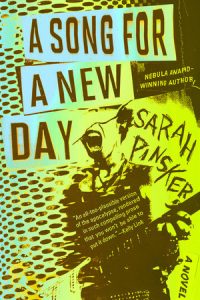 Fiction: A Song for a New Day, Sarah Pinsker

Winner of the 2019 Nebula Award for Best Novel

A Song for a New Day is the debut novel for Sarah Pinsker, but she is no stranger to science fiction readers. She has won multiple awards for her shorter works and is known for her beautiful prose and compelling characters. This novel has that and so much more. I will grant that the timing of my reading this novel enhanced the power of it to me. Reading a novel about a post-pandemic world still marked by mask-wearing and social distancing definitely spoke to me more personally now than it would have in January of 2020 or earlier. But this is a novel that demands attention, that celebrates the triumph of one voice over the unthinking mob, that shows how life and art may refuse defeat no matter what challenges they face.

Luce is a musician, traveling with her band through America. Their tour is interrupted by a series of terrorist bombings that target random large groups throughout the country. As it turns out, Luce and her bandmates perform the last public concert in the US before everything is shut down to prevent the terrorists from having large targets for their attacks. (Obviously that begs the question of whether the terrorists won, a question which is subtly addressed by the book though never overtly answered.)

While things are shut down because of the bombings, a pandemic begins to spread around the world. Confronting a massive death toll, social distancing becomes the norm. Concerts, theaters, and sporting events are all closed permanently. Most hotels also close. Schools are moved online. Many of those who are able to escape the cities move to small towns and completely rural areas, avoiding physical contact with everyone.

So, what is a performer to do with herself? Luce studies nursing and tries to find a role in this new society. But her heart is in performing, her passion is connecting with the crowd, and her desire is sharing music with concertgoers.

Rosemary is born in the “Before,” but has few memories of that simpler and safer time. Her parents fled to a small rural area where they raised her, far away from crowds and people. Her school was entirely virtual. Her entertainment comes via feeds to her hoodie. Her dating life is entirely online. She works at home as a customer service representative for Wallyworld, a giant conglomerate that sells everything and delivers it to anyone’s door.

A series of fortuitous events leads Rosemary to leave her comfortable job with Wallyworld and take a position with the media streaming giant StageHoloLive. Her job is to find new acts and sign them to be streamed around the world. To accomplish this she has to travel to new cities, get in touch with their illegal underground music scene, and send videos of the acts to StageHoloLive headquarters. This is how she ends up in Baltimore, where she finds Luce.

What does a recruiter do, though, when a band does not want to sign with StageHoloLive? Rosemary never considers that someone might not want to become world famous–but Luce does not want to be a virtual musician. She wants to feel the connection to the audience, to know when she is struggling because the audience reaction tells her, to find a way to dig herself out of the hole and connect with the people directly. StageHoloLive is not for her. ‘

I don’t want to ruin the surprises of the book, but there are many. Rosemary discovers things about StageHoloLive that disappoint her, and things about herself that elate her. Luce learns to be both less trusting and more trusting. And we all learn a thing or two about standing up for what is right and allowing vulnerability to show the way.

A Song for a New Day is sometimes poetic, even lyrical (pun not intended). The two protagonists are both likeable and are both damaged in different ways. How they find some healing for themselves and for each other is part of the beauty of the novel. You should not miss this one.