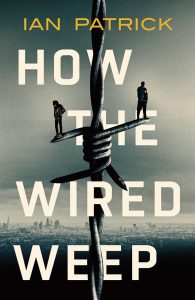 Some novels appeal to a more cerebral side, engaging your mind. Others are more visceral, drawing on your emotional side.

How the Wired Weep simply punches you in the nose and lets you bleed.

Ed is a police officer who handles what we call in the US “confidential informants.” Ben is one of his informants. Ian Patrick allows these two characters to tell their own stories in the first person, often providing very different perspectives of the same events.

Ben is a child of the streets. Raised in an abusive family, reared by gangs who gave him protection and belonging, he has known nothing but crime and drugs and abuse. Even his use of the police is very transactional: they give him money and he gives them information that hurts people he wants to see hurt.

Ed also had a rough childhood, but somehow found a different path. He sees a bit of himself in Ben and wants desperately to help Ben find another way. The challenge, of course, is that the allure of the streets and the pull of the drugs constantly draw Ben away from the light being offered by Ed.

In many ways, their stories parallel as well as intersect. Ed and his wife are trying desperately to have a child. Ed wonders whether he can be a good father but he is committed to doing everything he can to care for a child. After he is released from prison, Ben discovers that he is going to be a father. He also wants to be a good father but he has never had any kind of role model to guide him. As he says more than once, the people in his family don’t get to keep babies. They are born, then they are taken by social services. Given the proximity to gangland violence and the prevalence of drug use in Ben’s own life, he considers it highly probable that the same thing will happen to his own child.

Ed and Ben are both fixated on an up and coming gang leader, Troy. Ed intends to take Troy down. Ben wants to take over for Troy. However, Troy is cunning and ruthless. Defeating him will not be easy. And despite their similar goals, Ed and Ben are not really working together as a team. This means that they are often in conflict, occasionally at odds, and seldom actually cooperating.

Ian Patrick does a brilliant job giving voice to the compassionate cop and the hardened criminal. Ed is not perfect. Far from it. He sometimes skirts the law, he obsesses over the job to the detriment of his wife, he sometimes becomes the abusive father-figure that Ben has come to expect from the older men in his life. And Ben is not a caricature of a gang banger. He longs for something different. He wants to be a good father. He wants to win Ed’s approval. Many of his mistakes come from not seeing alternatives, not knowing how to act, succumbing to the demons that started haunting him during his childhood. These are two compelling characters in a plot that moves aggressively from beginning to its shocking end.

Ian Patrick was himself a police officer for many years, forced to retire early for health reasons. His understanding of the motivations of both cop and criminal is obvious from the first page through the last. It can’t be easy to have two very different narrators for the same story, but Patrick does it with grace and panache. This is not your typical police procedural novel. This is something different, something amazing, and something you should add to your reading list. 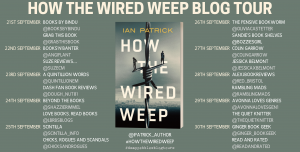 Our thanks to Emma Welton of Damp Pebbles Blog Tours for our copy of this book, provided for our participation in this blog tour. For other perspectives on the novel visit the other bloggers who are on the tour. The opinions here are solely those of Scintilla.

2 thoughts on “Blog Tour: How the Wired Weep, Ian Patrick”