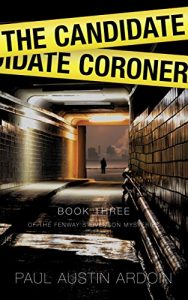 Despite her initial reluctance to run for the office she has held for a few months, Fenway Stevenson has been convinced by her friends and colleagues to run for County Coroner. Her opposition is not coming from the man most expected to run for the office, but from an associate of his. Still, running for coroner and running the coroner’s office simultaneously are proving to be a real challenge, particularly when a murder hits close to home.

A local businessman is found dead near the beach. Very quickly the investigation uncovers clues that point to her father’s wife as at least a person of interest. This is now the third case Fenway has taken with connections to her father, and her electoral opponent has made note of this. But when a teenaged campaign aide is murdered and the signs point to Fenway being the intended victim, she has to recuse herself from the investigations and go into hiding–while running for office! Talk about trying to balance impossible demands!

Fortunately no one can multitask quite as well as Fenway Stevenson!

In The Candidate Coroner, Paul Austin Ardoin has again skillfully woven the plot of this story into the fabric of the series. Seeds planted in book 1 which sprouted in book 2 are beginning to reveal their leaves and branches now in book 3. Fenway is beginning to realize (along with us faithful readers) that there is a deeper conspiracy afoot in her town, one that has everything to do with her rich and powerful (and for most of her life very absent) father. Individual cases have individual solutions, but sometimes there are overarching and overlapping motives. Things that were seemingly individual and unique previously are revisited in new light.

Even better than his storytelling is his character development. Fenway has always been a flawed protagonist. Fiercely angry at her father, she begins to realize that she is more like him than she ever suspected. And although she holds dear the values her single mother taught her, or more accurately because she holds them so dear, she is intensely focused on doing her job in the right way. If that means exonerating someone she has hated for years, or if that means sending her own father to prison, the truth is more important than her desires.

But will the voters agree?