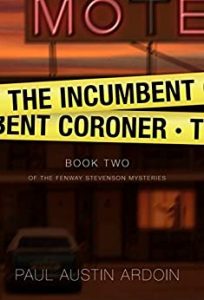 Fenway Stevenson has solved her first mystery as coroner: the murder of her predecessor. As summer turns toward autumn she has kept busy with her job and getting ready for her nursing boards. Her attraction to the local sheriff is a distraction, though, one that neither of them need as he is trying to salvage his marriage. What better way to put him out of her mind than to drive to Seattle, pick up a painting of her late mother’s from storage, and visit an old boyfriend to have some hot sex.

Almost as soon as she arrives, though, she gets a call from Dez, a police officer working in the coroner’s office. A murder requires her to fly home to California immediately. The victim: the town’s mayor, the first black female elected official in the county.

Suspicion turns toward the mayor’s son, a former addict who seemed to have turned his life around. When he confesses, all of the pieces seem to fit. But neither Fenway nor the sheriff are convinced of his guilt, and when Fenway’s friend Rachel is nearly killed at home and then barely escapes with her life from a hospital gunman, Fenway realizes that she is facing a much larger enemy.

I absolutely adore the character of Fenway Stevenson, and author Paul Austin Ardoin has invested his initially reluctant and now incumbent coroner with enough depth and backstory to take her through a lengthy series. Ardoin is also extraordinary at planting seeds early in one book that are allowed to sprout in later books (sometimes two or three books later as I have discovered). Some series brag that their books can be read as “stand alone” novels. This is not a series which lends itself to that scattershot approach. I suppose the books could be read individually, but Ardoin has worked hard to reward readers who invest themselves in the series and not in a single novel. The result is a coherent web of novels that relate to one another as integrally as a television series with an extended story arc might. Yes, there is a plot that wraps up within the scope of the novel. But there are also loose ends that lead to future stories, there are clues that are dropped in the first book that bear fruit in this second book, and those who begin at the beginning are clearly valued and honored by a writer who invests in them as well as in his characters.

I read a lot. One of the blessings of reading as much as I do is finding these hidden gems in unexpected places. Paul Austin Ardoin may not be a household name in the way that James Patterson or John Grisham or David Baldacci or Lee Child are. Frankly, that’s a shame. The Fenway Stevenson series is as good as any series I’ve read.