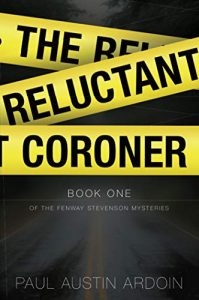 Fenway Stevenson got her name from her father, a lifelong Red Sox fan. (For those of you not into American sports, they are Boston’s Major League Baseball team.)

After her mother took her and left, they got virtually nothing else from him.

Her father went on to become wealthy and powerful, the most powerful man in his California county, purchasing private jets and large homes and incredible influence. Fenway and her mother lived in poverty in Seattle, using food stamps and wearing secondhand clothes. She did not see her father at her graduation from high school, or college, or any of the other milestones even an estranged father might show up for.

Now, though, her mother has died, and she is without a job or a home. And her father has called, wanting to make amends, offering her a place to stay and the possibility of a job. Fenway swallows her pride and heads south to California.

She is almost immediately approached by the local sheriff about a position with the county. They are in need of a coroner. Fenway is a nurse and is one class away from finishing her masters in forensic science. Despite her youth and inexperience and lack of credentials, she has a powerful backer for the job.

Despite her misgivings she takes the job. Immediately she is thrown into the middle of a critical investigation: the murder of her predecessor.

It is an unlikely premise, albeit legally possible. California coroners do not have to have any specific training or credentials–it is an elected position or, as in this case, an appointed position until an election can be held. But Paul Austin Ardoin manages to make it believable and thoroughly enjoyable. This is in no small measure to the strength of his protagonist. Fenway Stevenson is a strong, fierce, independent (despite her circumstances), and believable character. She makes mistakes of the kind that young women and new employees do. Some of her decisions are wrong. Some of her choices are mistakes. But she is guided by the principles she learned from her mother and does not allow anyone or anything to prevent her from pursuing the truth.

Even if that truth creates a problem for her father.

I love books that pull me in and won’t let me go. The Reluctant Coroner is very well written with a compelling and delightful protagonist and a diverse cast of characters that add a distinctively Cali flavor to the mix. I finished this book in one afternoon/evening of reading. It’s not fair to say that I could not put it down. I am a grown up. I have choices. I could have put it down.

I just didn’t want to.

This is the start of a series and I am definitely planning to continue following Fenway Stevenson through her unlikely and reluctant career. Do not be reluctant to pick up The Reluctant Coroner. Just plan on being reluctant to put it down.

Our thanks to author Paul Austin Ardoin for our copy of The Reluctant Coroner, provided in the hope that we would review it. We are very happy to oblige. The opinions are strictly those of Scintilla.