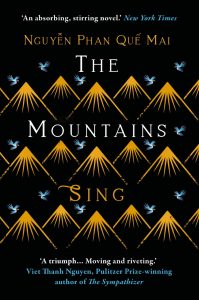 I might be able to count on one hand the number of books I have reviewed which took my breath away. The Mountains Sing is one of those books. It moved me to my core. I am shaken, I am touched, and in spite of the tragedies in the book I am inspired.

Moving back and forth between the stories of grandmother and granddaughter, the novel reflects the pain of Việt Nam as felt by the people who experienced it in their own homes, their own families, their own country. Hương is a teenager coming of age during the latter days of the war with America. She is from Hà Nội, where bombs and air raids are a regular occurrence. To survive, she and her grandmother flee the city for a while. When they return, their entire neighborhood has been destroyed.

To pass time, her grandmother tells her stories of her own life. Trần Diệu Lan was born in 1920. Although her family was reasonably well to do in their farming community, a fortune-teller prophesied that Diệu Lan would lose everything and become poor. This prophecy came true during the Communist government’s rise to power after the French were defeated. Land Reform and its excesses forced her to flee with her six children. Along the way she faced untenable choices about feeding and caring for her children, choices that would leave lasting scars on the family.

Hương has her own tragedies. Her mother and father are missing. Both volunteered for the army. Neither has been seen again. Her uncles are also gone. No one is quite certain whether any of them are still alive or whether they were killed by the Americans. Hunger stalks the land. Thirst is also a danger unless one drinks from water possibly tainted by war chemicals or natural parasites. Hương and her grandmother live in a makeshift lean-to until her grandmother decides to trade on the black market and earn enough to build a new house. In Communist Việt Nam, this is a dangerous and scandalous choice.

One by one members of the family return from the war. Some are injured physically. Others carry internal scars. In war, possibly one side or the other “wins” a victory. For families, for soldiers, for survivors, there is usually only loss.

Nguyễn Phan Quế Mai is a poet, and the music of her poetry infuses her first novel. She is a gifted storyteller. Her characters are full of heart and hope. Some are crushed by their sorrows. Most, though, show a strength that we hope we have and hope more that we never have to use.

I’m an American whose childhood coincided with the war. It was a far off event that barely touched my consciousness. My parents sheltered me from most of the news from Asia. The war ended when I was 9, but it did not truly affect my life. It was not my country, my father had served in Germany during the early ‘60s and I had no other relatives in the service at that time. That separation was a gift and a luxury.

The best fiction tells the truth. The truth is that war is ugly and destructive. Politicians and generals can look at maps and strategies and “the big picture.” Little girls and grandmothers see bombed houses and shattered lives and amputated limbs and starving children. When we can see others as human, realize their children are our children, recognize their lives are as valuable as our own, appreciate that they want to love their families and work their jobs and picnic in their parks just as much as we do, maybe, just maybe, we can begin to hope for a world without war.

I am not naive. I am not confident. But after reading The Mountains Sing, I might be just a little bit more hopeful. 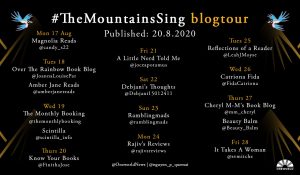 Our deep thanks to Anne Cater of Random Things Blog Tours and to author Nguyễn Phan Quế Mai for our copy of this book in exchange for our review. The opinions are solely those of Scintilla. For other perspectives on this powerful and moving book, check out the other bloggers on this tour.