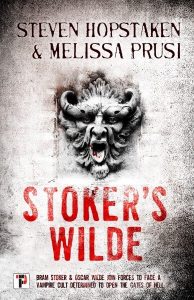 For someone who is not generally a fan of the horror genre, I seem to be reading quite a few of them. Last year I was sent an ARC of the prequel Dracul, a fictionalized biography of Dracula author Bram Stoker. It was good. Very good. And it gave me nightmares. Yes, I am a 54 year old fraidy cat. I do not like things that go bump in the night.

Still, when I was invited on the blog tour for Stoker’s Wilde West, I accepted. I felt, though, that I should read the first book in the series before jumping into the second book. It does not take a degree in math to realize that I was then committed to reading not just one but two horror books. My sleep patterns might never recover.

Stoker’s Wilde begins with future authors Bram Stoker and Oscar Wilde (The Portrait of Dorian Gray, The Importance of Being Earnest, etc.) having dinner together at the Wilde’s family home in Ireland. Neither is very fond of the other, though Stoker is friends with Oscar’s brother William. Another guest at the dinner, Sir Richard Burton, has been charged by Queen Victoria with hunting a suspected werewolf that has killed a young woman in Ireland. Before they quite realize it, the Wilde brothers and Stoker have been drafted to help Burton in his hunt.

After the hunt they generally go their separate ways, much to the relief of both Oscar and Bram. Yet their paths are fated to cross again. This time, a vampire has come into the Wilde home, interrupting Oscar’s engagement party. Again, the two nascent writers go after the monster.

Months pass, and the two men find themselves in London. There a number of vampires under the leadership of “the Black Bishop” is plotting to take over Britain. Can the two men put aside their differences long enough to fight this threat? Even with allies, do they have the strength and ability to overcome this evil?

Vampires. Werewolves. Other monsters. Stoker. Wilde. This book has all the earmarks of a Victorian horror novel. However, I hope I do not burst too many bubbles by saying that this falls more under the fantasy genre than truly horror. Written as “found” documents–letters, diaries, reports from contemporaries–the book takes on the feel of reportage from the protagonists themselves. Yet although the voices seem authentic to the characters, with Stoker being introspective and serious, Wilde’s flamboyance and joie de vivre gives the book a much lighter feeling than a true horror novel has. Oh, the vampires are quite scary, with oodles of blood and gore and villainy. But it is handled with a deft touch, and often told through the sardonic wit of Wilde.

I suspect horror readers will like the nods to Dracula and The Portrait of Dorian Gray and other classics of the era (in this it reminds me of the Athena Club books by Theodora Goss). But even those of us with squeamish stomachs and nervous temperaments can enjoy the repartee between the characters. Stoker and Wilde make an unlikely pairing, but in the hands of these authors they are brilliantly matched. The authors bring in quite a few actual events from the men’s lives: Bram Stoker did marry the woman once courted by Oscar Wilde which led to them not speaking for some time. They did later reconcile while in London. Bram Stoker was the assistant to the greatest actor of the time, Henry Irving, and did manage Irving’s Lyceum Theater in London. Stoker was indeed quite ill as a child but made a seemingly miraculous recovery around the age of 7 and flourished into a rather good athlete. Wilde was a known homosexual, although he did publicly have “relationships” with women which kept him from being arrested for a while. The authors cleverly weave these things into the book in a very natural and organic way.

Seeing as the original Dracula was written as a series of letters and other documents from the book’s characters, it is an appropriate method to use in this tribute to the book, it’s author, and his friend. Although I suspect that Wilde and Stoker did not actually hunt vampires and werewolves together, this fictionalization of their lives is fun and creative and well-written. I am looking forward to its sequel.