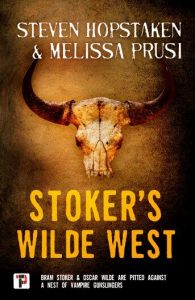 Bram Stoker and Oscar Wilde have put their vampire-hunting days behind them. Stoker has returned to his family and to his position as theater director at the Lyceum. Wilde has gone on a celebrated tour of the United States, becoming rather famous in the former colonies. He successfully went through the entire tour without confronting a supernatural being once. Now, having written a play that is set to debut in New York, Wilde is ready to return to the US and take his well-deserved place among the greatest playwrights in history! Not seeking quite so much glory, Stoker has also arranged an American tour for the Lyceum company where they will perform in various cities around the country for a populace starved for the elite entertainment only the British can provide.

Things do not go quite according to plan. Wilde’s play is a flop, closing within a week. The Lyceum tour is a success, but then word reaches Stoker and his friend, the vampire (and famous actor) Henry Irving, that their old vampire-fighting companion Robert Roosevelt and his nephew Teddy (yes, THAT Teddy Roosevelt) were having some trouble fighting vampires in the wild west. Stoker’s unique ability to see supernatural beings and their traces coupled with Irving’s vampiric senses meant they would be invaluable allies to the Roosevelts in finding and destroying these minions of hell. Since Roosevelt had saved their lives in England, they were quite willing to return the favor and go to him.

Then, while Flossie Stoker and the toddler Noel wait in St. Louis, Bram Stoker and Henry Irving go missing. Flossie contacts their old friend Oscar Wilde and he comes immediately to help in the search. And since one should be fashionable while searching the American southwest, Wilde does not forget to bring his purple top hat along.

What follows is a madcap thrill ride through an old west filled with vampires, invisible Native American villages, desperados, Pinkerton agents and Cavalry troops, doorways to other dimensions, and a collection of allies and acquaintances that includes Calamity Jane, Samuel Clemens (Mark Twain), and several other characters from American history. Fans of classic SFF novels will also enjoy the not so subtle references to Edgar Rice Burroughs’ works later in the book.

Written in the same “found letters and diaries” style as the first book (and also Dracula and other Gothic Horror novels), the plot is fun and full of action. The heart of the book, though, is in the divergent personalities of Stoker and Wilde. Stoker is serious, sometimes morose, deeply thoughtful, seldom impetuous, weighed down by the responsibilities he bears. Wilde is, well, wild. Bawdy and egotistical, wanting to settle down with his paramour Constance but drawn by his passions to have sex with young men who are almost as beautiful as he is to himself. The contrast between these two fictionalized versions of the literary giants is an absolute joy. They constantly get on each other’s nerves, they fight like brothers–or like an old married couple as one observer puts it, and they manage at every turn to surprise and delight the reader.

One could almost wish the old west had been filled with vampires just so this collaboration could have happened. Alas, it was not. (Considering I grew up in Colorado, I actually don’t really wish the American West to be a hotbed for vampires.) Still, Hopstaken and Prusi deliver another fun novel with enough horror to keep things grisly, enough humor to keep readers engaged, and enough cameos (and longer appearances) by historical figures to keep a Google search open in a window. Stoker and Wilde may never have written a play or a novel together. I am awfully glad that Hopstaken and Prusi have now written two.

Our deep thanks to Anne Cater of Random Things Blog Tours for our copy of this book given in exchange for our review. We suppose the fact that we felt we had to go purchase the first one in the series is an even better expression of our feelings toward it than the review is! The opinions are solely those of Scintilla.