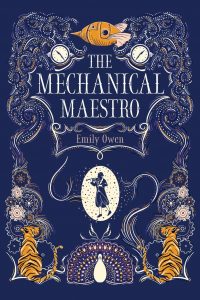 My father was once a musician. Perhaps he was always a musician; do you ever lose the music in your soul? He played the saxophone, studying his art in Belgium before joining the army and playing throughout Europe in the army band. After his discharge from the service, he became a teacher and band director, working in schools in Indiana and Colorado until deciding to change careers. He also led our church choir for many, many years.

The Mechanical Maestro is one of the most musical books I have ever read. Set aside for a moment the interesting characters, the steampunk setting, the fascinating concepts explored by the author. Her description of the music makes the heart sing along. Usually words fail when trying to express the beauty of other artistic expressions. Just as a visual art might complement a book or a melody may evoke the same mood as a book but neither can capture the scope and detail of the book, so words cannot do more than reflect a dim view of a painting and cannot capture the spirit of a composition. Emily Owen, though, does not let that stop her from trying. When describing the music in the book, her prose borders on the poetic, leaving this reader wanting to hear what the writer is hearing. Those were among my favorite passages in the novel.

George and Douglas Abernathy are watchmakers struggling to make their living in London. They live with their younger sister Molly in the shop/house their parents left them. George and Douglas are also builders of automatons, self-operating devices that can do a variety of tasks. On a bet from a nobleman, George sets out to build a mechanical musician, one that can compose its own music as well as play magnificently. Douglas helps finish the project by giving the automaton inspiration, teaching it to read, to study nature, to draw music from the rhythms and heartbeats of the world itself. The result is Maestro, labeled by the delighted nobleman as the greatest musician the world has ever seen.

The Abernathys made Maestro better than they could have imagined. Maestro takes London by storm. He plays to packed theaters, he is the talk of society. He is also a subject of great controversy. Some want to take him from his owner, eager to profit from his talents. Others want to destroy him, considering him a blasphemy against God. Many believe there is trickery involved, a tiny human inside the casement generating the music. What few realize is that within the mechanical works a sentience arises, one that is self aware, intelligent, filled with beauty and wonder.

Emily Owen may be writing about a machine, but her book is really an exploration of what it means to be human. George Abernathy is usually cold, distant, seemingly unfeeling. Douglas is emotional, impetuous, impatient. Molly is warm, sarcastic, brilliant, and resourceful. And Maestro. Maestro is thoughtful, introspective, curious, and eager to please. How much of Maestro is “programming” (to use a word from a much more modern context) and how much of it is “natural”? Cannot the same questions be asked of humans? Is George’s personality due to his nature or due to his nurture? Is Molly’s resourcefulness hardwired or was it developed? In moving these questions to the character of the automaton, Owen gives the reader the space to consider them personally without threat. She provides the invitation. The reader may choose to provide the introspection.

The Mechanical Maestro is billed as the first of a new series. I am excited to see what new concepts the Abernathys build (or in botanist Molly’s case, grow). But I am more excited to see what philosophical sandbox Owen constructs within her steampunk flavored world. This promises to be a great adventure into an alternate past.

Our deepest thanks to Anne Cater of Random Things Blog Tours for our copy of The Mechanical Maestro in exchange for an honest review. The opinions are strictly those of Scintilla.

Emily Owen (www.e-owen.uk) studied English Language and Literature at the University of Leeds. Since completing her Masters by Research, she has worked as an Archives Assistant at the University of Huddersfield. She lives in Wakefield, West Yorkshire. The Mechanical Maestro is her first novel, and is the first book in an upcoming series following the adventures of the Abernathy family and their clockwork creations.