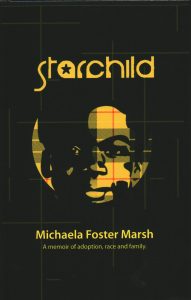 Michaela Foster Marsh has known her share of both love and loss. She grew up in a loving family in Glasgow, Scotland. Her father was a minister in the Church of Scotland. Her mother was devoted to her children. And Michaela was deeply attached to her “twin.” Frankie was adopted by Michaela’s parents when she was just a toddler. The two had been born within a month of each other in 1966 and their parents used a stroller (pram) designed for two children to walk the streets of Glasgow with them. This attracted a lot of attention: at the time, there were very few people of color living in Glasgow. Frankie’s biological parents were Ugandan.

Tragically, Frankie died in a fire when he was just 27 years old. Soon thereafter Michaela’s father died. Michaela had moved to Canada to be with her husband and had established a singing career there. However, the time came when she had to return home. She left her husband, left Canada, and spent some months caring for her sick mother. Then, cancer took the life of her mother.

When Michaela inherited her father’s papers, she realized that Frankie had started looking for his biological mother. He had always felt a sense of abandonment. Although he loved his parents, he often acted out–sometimes in ways that were dangerous to himself and others. Marsh explains that this is very common among adopted children and even more so among children adopted across racial or ethnic lines. This had led to strains and divisions among the family. Still, her father was trying to help Frankie in his search for more information. She decided that part of her duty as a sister and a daughter was to complete Frankie’s search for his family.

After finding a few bread crumbs in the UK, Marsh travels to Uganda. She meets there with the headmistress of a girl’s school where a man with the same last name as Frankie’s mother had been pastor of the on campus church. Shockingly, this man was Freddie’s grandfather. More shockingly, the school has a picture of Freddie’s mother. One of the teachers in the school is even the sister-in-law to the deceased pastor–and her sister is still alive! Furthermore, she knows Frankie’s biological brothers. She calls one of them, who insists on meeting Michaela that same day.

Suddenly Michaela is pulled into the embrace of a large and loving Ugandan family. They want to know all about their brother from Scotland and they insist that she is now their sister. She meets Frankie’s step-grandmother. She meets the rest of his brothers. She sees where his mother is buried. And she determines that she has a mission in honor of her brother.

One of Frankie’s favorite songs is titled, “Starchild.” Michaela determines to build a school in Frankie’s honor, a school they will call “Starchild.” She begins a charity back in Scotland to raise money for Ugandan schoolchildren. First, they collect money to help with medical needs, uniforms, and school supplies for existing schools. Then they partner with a Ugandan school to establish the Starchild school. Michaela is focused on making sure her brother’s memory lives, especially in the country of his ancestry. She succeeds far beyond her wildest dreams.

Starchild (www.starchildcharity.com) continues their work through their own school, through helping other Ugandan schools and children, and through their newest project supporting autistic people in Uganda. Although Frankie Marsh never visited Africa, his sister continues to devote herself to making a difference in the lives of the Ugandan people–and celebrating the new family she serendipitously found there. The book itself is honest and direct, not shying away from the faults of her parents, her brother, or herself. Most of all, though, it is a book telling how the love for a lost brother has been transformed into good works that have made a difference in many more lives. I inhaled this book in a single afternoon. I suspect it will live in me for years to come. 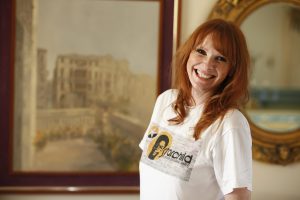 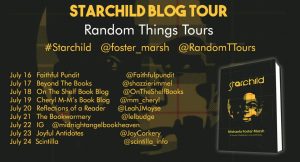 Our thanks to Anne Cater of Random Things Blog Tours for our copy of this book, given in exchange for our participation in the blog tour promoting its publication. For other perspectives on this book we encourage you to check out the rest of the blog tour participants. The opinions here are solely those of Scintilla.