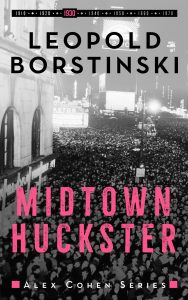 Alex Cohen has risen almost to the top of the New York City mob. A loose affiliation between the Jewish and Italian mobs means somewhat less violence and more profits for everyone. As part of the Murder Corporation, Alex shares responsibility for killing those who violate the terms of this affiliation. He does his job well.

This shaky affiliation, though, has its limits. Arnold Rothstein, a guiding influence in keeping the mobsters together and focused, lies dead. With the end of Prohibition come new pressures on the mob’s income. Reformers and crusades who cannot be bought and are too powerful to kill arise. Eliot Ness gets his man; Alex’s friend Al Capone is sent to prison. Thomas Dewey tries first to convict Dutch Schultz. Alex successfully threatens one juror into refusing to convict, but then Dewey sets his sights on Alex’s friend Lucky Luciano. No doubt, Alex himself will be in the prosecutor’s crosshairs.

With enough murder and mayhem to make The Untouchables look like a Nick Jr. special, Midtown Huckster shows Alex Cohen at the top and chronicles the forces that seek to pull him down. Rival gang leaders, fearless prosecutors, even his own wife create challenges for him. Some are deadly. Some are economic. Some are emotional. All are destructive.

As in the first two books, author Leopold Borstinski blends historical fact together with a fictional protagonist to create a vivid look at 1930s gangland NYC. Dutch Schultz and Lucky Luciano were indeed targets of prosecutor (and later presidential candidate) Thomas Dewey. Fellow gang leaders voted to murder Schultz after he refused their orders to leave Dewey alone. Borstinski does bring Alex Cohen into some events as a participant instead of the actual historical figures, but he is writing a novel not a textbook.

Each of the three novels in the Alex Cohen series is filled with action, drama, and pathos. Cohen is not a “good kid with bad friends.” He matures from a tough guy collecting debts through violence into a stone cold killer. His only friends are men like himself, men who will stop at nothing to reach their goals. Borstinski never apologizes for Cohen, nor does he try to make him likable. Cohen does have a soft spot for his own children and a calculated sense of loyalty toward his fellow gangsters. Those are not particularly good starting places for redemption.

Borstinski’s writing is ferocious. I swept through all three books in roughly 24 hours, unwilling to pause longer than needed for food and sleep. Alex Cohen grabs hold of the reader and shakes them to the core. Gangland fiction is not my usual go-to read, but this series is dynamic. I enthusiastically recommend it.

For a nonfiction look at some of these same events, check out Invisible by Stephen L. Carter, which we reviewed in February, 2019.

Our thanks to Emma Welton of Damp Pebbles Blog Tours and author Leopold Borstinski for our copy of Midtown Huckster, provided solely in exchange for an honest review. The opinions are those of Scintilla.Info.