Book Review: How Rory Thorne Destroyed the Multiverse, Book One of the Thorne Chronicles, K. Eason 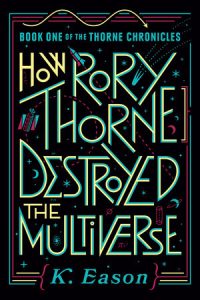 Science Fiction: How Rory Thorne Destroyed the Multiverse, Book One of the Thorne Chronicles, K. Eason

I have been told I have a dry sense of humor. I don’t know whether that’s necessary to appreciate How Rory Thorne Destroyed the Multiverse, but it certainly doesn’t hurt. K. Eason writes with tongue firmly in cheek. She has a very sardonic style of writing that left me quietly chuckling throughout almost the entire book.

Rory Thorne is the princess of the Thorne Consortium, a group of planets allied under the rule of a king. Always, a king. In fact, no daughters had been born to the Thorne line in over 200 years! The firstborn son of the king was always named, “Rory.” There was concern at her birth about what to name her, but since she was the firstborn and since “Rory” could be used for either gender, Rory was her given name.

With no girls in the line for over 200 years, customs involving princesses had been forgotten. In searching through the ancient histories of their people, the vizier discovered that princesses were supposed to be officially named at a special ceremony. Fairies were invited to that ceremony to bless the girl with gifts: beauty, kindness, music, and possibly other gifts. Thirteen fairies were invited. One of these was a bit of a wild card. Her last gift was blamed for the dearth of girl children for a bicentennial. Still, the Thorne Consortium was known for its traditions, so the fairies were invited.

The thirteenth fairy once again gave a very different gift. Her gift was for Rory to be able to see through lies and flattery and discern what a person was truly saying as they talked. The twelfth fairy changed her gift at the last minute in response, giving Rory the gift of courage so she could respond as necessary to the lies that princesses are told.

Rory assumed that she would one day inherit her father’s throne and rule her people. That assumption proved incorrect. Her father was assassinated when she was still a child…and her mother gave birth to a son. As soon as her brother was born, he became the heir. So, what does one do with an extra princess? Betrothe her to the heir of an enemy group of planets in order to stop a war.

This was not part of Rory’s plan!

Eason writes with intelligence and wit. Rory is a teenager who sometimes acts as a teenager. She is also quite smart, and because of the fairy gifts she is both able to see through lies and act with courage. Sometimes these traits conflict with each other and bring her into conflict with others, including her own advisers. When she discovers a plot to usurp the throne of her new home, she has to use all of her gifts and talents to set things right.

The style of the book is quite breezy. Eason writes as a third-person observer, sometimes breaking down the wall between reader and writer and conversing directly with the reader (as a future historian writing the biography of Rory Thorne). It is sort of an amalgam of fairy tale (once upon a time) and science fiction. Fairies and arithmancy play crucial roles in the story, as do computers and spaceships. Neither fully fantasy nor science fiction, this is a book that combines the best elements of both genres to chart its own course and take the reader on a fun voyage through the multiverse.

K. Eason’s debut novel is fresh and innovative. A feminist reimagination of both science fiction and fairy tales, Rory Thorne is a fun and creative novel. I thoroughly enjoyed it.