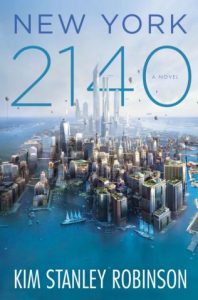 Mutt and Jeff. Charlotte. Vlade. Inspector Gen. Charlotte. Franklin. Stefan and Roberto. Amelia. And some random citizen who jumps in to narrate from time to time. These are the main characters of Kim Stanley Robinson’s sweeping look at the early part of the decade beginning in 2140. They are also all residents of the same building in Manhattan.

New York in 2140 has changed a lot since our time. The whole world has, for that matter. Sea levels have risen by about 50 feet. This means that much of the city is flooded all of the time. Lower Manhattan’s buildings now stand in enough water to be accessible primarily by boat. Most of Brooklyn, Queens, and Bronx are also drowned. That does not stop people from living there, though. The mystique of New York continues to draw people. Rich and poor, refugees and magnates, all gather in the city that never sleeps.

New York in 2140 is also much the same as in our time. The rich get richer and the poor get poorer. Although the residents of the Metropolitan are themselves reasonably well off for the most part, they see the inequities around them and are touched by them in varying ways. Mutt and Jeff are coders, quants, willing to crash the system by hacking the computers running it. Charlotte works with people who need housing and is frustrated by the lack of affordable housing in a city with literally thousands of apartments being underutilized by their wealthy absentee owners. Inspector Gen sees the desperation poverty brings to the city and seeks to use her police authority to effect positive change. Amelia uses her internet platform to raise awareness, usually for the plight of animals affected by climate change. Franklin is part of the system but begins to question its legitimacy. All of them come together to support each other and try to change the world.

Filling over 600 pages and covering a period of several years, New York 2140 almost reads like a historical novel. The perspective changes from chapter to chapter, though for the most part the characters are seen in the third person. Only Franklin and the unnamed citizen use the first person to tell their stories. Sometimes the stories are funny. More often they are serious. Most of all, though, they are relatable and human. Every character develops over the course of the novel. Each of them reveals depths that were unseen in earlier chapters. And all of them discover how to work together to learn from history and change the future.

Robinson has written a novel with both breadth and depth. Although you could (unfairly) summarize the book as being three years in the life of some residents of a NYC building, it is much more than that. It is an examination of our own society. It is an exploration of the power of relationships. It is a celebration of ordinary people. It is a plea to learn from the mistakes of the past. New York 2140, like the city it is set in, seeks to accomplish big things–and it succeeds.