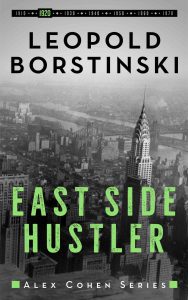 Alex Cohen has returned from the trenches of World War I a broken man. Living on the streets, panhandling for change and living on crusts and stolen fruit, he has fallen a long way from his days as the Bowery Slugger. Still, some of his friends remember who he is and what he could do before. They are willing to help, and wait, and see him become the man he was destined to be.

East Side Hustler follows the next decade of Alex’s life after he returns from the war. He consorts with the biggest names in organized crime, including Arnold Rothstein, Al Capone, Lucky Luciano, Abe Bernstein. He starts a family. And he builds on the violent reputation he had previously earned. It proves to be a dangerous life for himself, his associates, and his family. By the end, the demons and contradictions within his life begin to take their toll, and his life begins to move in a new and uncharted direction.

During the real-life Prohibition Era in the US, alcohol was smuggled over the border from Windsor, Ontario to Detroit, Michigan under the supervision of the Sugar House Gang, aka the Purple Gang. Led by Abe Bernstein and his brothers, they became suppliers for many of the speakeasies in the Midwest and East Coast. Al Capone was a major customer in Chicago. Arnold Rothstein and his associates, among them Lucky Luciano, were customers in New York City.

The actual Arnold Rothstein is largely credited with transforming organized crime into a business. A gambler at heart, many hold him responsible for fixing the 1919 World Series. Although this event does not figure into the events of the book, Rothstein does play a major role in mentoring Alex on his way up in the New York gangs. An event that does get mentioned in the book is Rothstein’s death in Florida. Rothstein believed he was set up in a fixed poker game that resulted in him losing $350,000. When he refused to pay the debt, he was gunned down in the street in 1928.

As in the first book, Borstinski weaves actual events and real life figures into the story of Alex Cohen. Famed gangster nemesis Elliot Ness even makes a brief appearance. The history of gang activity during Prohibition has been the subject of numerous books and movies, but Borstinski skillfully makes that history come to life in the person of his fictional protagonist. We see the violence and the audacity it took to survive as a gangster during those days. We also see the cost in the lives and in the souls of those involved. Alex works hard to achieve his dreams. Whether those dreams are worth the cost is left to the reader to decide.

Again, our thanks to Emma Welton of Damp Pebbles Blog Tours and author Leopold Borstinski for providing us with our copy of this book in exchange for a review and in preparation for a later blog tour of the third book in the series. The opinions are, as always, solely those of Scintilla.Info.