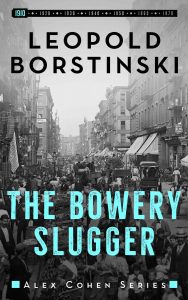 The Bowery Slugger starts with a reflection on the game of baseball. In very thoughtful and almost pastoral language, author Leopold Borstinski muses on the history and meaning of the game and the preparation of the tools of the game. He goes into particular detail on the shaping and honing of the baseball bat: the wood used, the varnish applied, the power available to someone who knows how to swing the bat.

This book has nothing to do with baseball.

Alex Cohen arrived in New York in January, 1915. A teenager fleeing with his family from the Cossacks leading pogroms in Ukraine, they arrived with their clothes and almost no money. Alex’s father had been a tailor in Ukraine. When they settled in the Bowery section of Manhattan, it seemed that every Jewish tailor from Europe had already set up business. Earning money would be a challenge.

On Ellis Island Alex had been given the name “Fabian” due to a misunderstanding. Alex had been involved in some shady dealings while they lived in Ukraine. As Fabian he found it easy to work his way into the lower levels of the local Yiddish-speaking gang. Starting with handling deliveries, he quickly worked his way up to managing numbers games and collecting debts. He earned a reputation as a violent and ruthless debt collector, quick with his fists and sometimes with a baseball bat or a knife. The nickname “Slugger” did not come from his skills on the ball field.

Alex/Fabian is a man of intense contradictions. He is a violent man in a violent business, yet refuses to upset his mother by missing Shabbat dinner on Friday night. He is generous with his family and with his subordinates but is quick to enforce obedience and brutal in punishing those who cross him. He is deeply and chastely in love with his neighbor Rebecca, yet spends most of his nights with a prostitute. These contradictions create much of the conflict within the novel.

Borstinski follows Alex over three years where he rises in the ranks of the Yiddish gang. By the time he turns 18, the conflicts and contradictions within his life begin to come to a head. Borstinski has carefully built the story brick by brick, and when the end of the story arrives it is both a satisfying conclusion to the work the author has done and a terrific segue into the next chapter of Alex’s life.

Most immigrants are like Alex’s and Rebecca’s parents. Hardworking, decent, hoping to create a good life through honest work in their new country. Those are the stories of most immigrants. They are great stories of wonderful people. But there are a few who choose a darker, quicker path to financial stability. Whether Irish, Italian, Jamaican, Mexican, Vietnamese, or Jewish, most immigrant groups will have that minority of people who bring the sins of the old country and manifest them in gangs in the new country.

In the hands of a good author, the stories of those gangs can be amazing.

Obviously extensive research into the culture, environment, and characters of WWI era New York City has gone into this novel. A major character in the book is “Waxey” Gordon. Born as Irving Wexler, “Waxey” was an actual member of the Kosher Mafia from the time. Known primarily for bootlegging and illegal gambling, he takes the young Alex under his wing and teaches him the ins and outs of the trade. Alex may be fictional, but his interactions with the real (albeit fictionalized) Gordon help secure the book into the milieu of the era.

Borstinski shows the dark side to the early 20th Century Bowery. Violence, prostitution, gambling, drugs. Alex is pulled into this world but never loses his desire to be truly part of the American fabric, with a job that provides for a family, a respectable wife and children who live in safety and security. I look forward to seeing whether Alex is able to resolve these contradictions in the subsequent books in this series.

Our thanks to Emma Welton of Damp Pebbles Blog Tours and to author Leopold Borstinski for our copy of The Bowery Slugger, given to provide context for a future blog tour review of the third book in this series and to mute the OCD that always flairs when we read series out of sequence. As always, the opinions are strictly those of Scintilla.Info.

ABOUT THE AUTHOR Leopold Borstinski is an independent author whose past careers have included financial journalism, business management of financial software companies, consulting and product sales and marketing, as well as teaching. There is nothing he likes better so he does as much nothing as he possibly can. He has travelled extensively in Europe and the US and has visited Asia on several occasions. Leopold holds a Philosophy degree and tries not to drop it too often. He lives near London and is married with one wife, one child and no pets. Find out more at LeopoldBorstinski.com