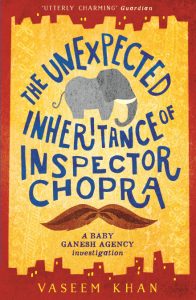 Then there is The Unexpected Inheritance of Inspector Chopra. It features the most unlikely partnership I have ever encountered in a mystery novel.

Inspector Chopra is retiring from the Mumbai police force. He has served for decades without any scandal or blemish. He would continue serving but a heart attack has forced him unwillingly into early retirement. The morning of his last day at work his wife hands him a letter from his uncle. She insists that he read it. His uncle is sending him something quite unusual. He slips it into his pocket, but the day gets away from him and he never gets the letter read. Until he gets home and he finds his uncle’s present in the courtyard of his apartment building.

Inspector Chopra (ret’d) is not quite sure what to do with this gift. Although elephants are much more common in India–even in Mumbai–than they are in other places, an urban apartment building is an unlikely home for the creature.

Another matter also has Chopra’s attention. A young man is found, drowned, under strange circumstances. The young man’s mother demands that the police investigate his death. Chopra believes passionately that justice is for all Indians, not just the rich. After his retirement, though, his replacement is eager to forget the whole matter.

So, although he is retired, Chopra begins looking into the young man’s death himself.

Vaseem Khan does a marvelous job setting the table early for the story he wants to tell. His descriptions of the character and personality and appearance of Chopra, his wife Poppy, and the other characters in the book give us a vivid look at who we are reading about. Chopra and Poppy have a very loving and mutually respectful relationship, though not without its problems. Khan allows these problems to reveal themselves naturally through the book. Some are resolved, some are not, but we get to see inside the lives of people in an arranged marriage who have found they love each other. It is beautiful and quite different than the American model. Given the high rate of marriages that fail in the U.S., there is probably much to learn from this ancient tradition.

And the affection that forms between Chopra, Poppy, and the elephant (named Ganesh) is delightful to see. Ganesh proves to be unexpectedly useful in Chopra’s investigation! Who knew that an elephant, especially a baby elephant, could become an investigative partner? But at times when all of Chopra’s human companions are unavailable, Ganesh is there for him. It is fun and surprising and quite enjoyable.

Mumbai is a magnificent setting for a novel. I have never been to India. Vaseem Khan helps me realize how much I have missed. Chopra’s investigation takes him from the poorest slums to the wealthiest of malls (and reading about Chopra teaching Ganesh to ride an escalator is worth the price of the book by itself!). Mumbai is a city of contrasts between the incredibly wealthy and the desperately impoverished. Khan recognizes the corruption that stains much of public life in the city and country, but he also celebrates the public servants who, like Inspector Chopra, cannot be bribed or corrupted. Without flinching away from the blemishes, Khan lifts up Mumbai as a city of hope and dreams.

I doubt I am giving too much away when noting that this is the start of a series of novels featuring this unusual pair of investigators. Ganesh and Chopra live to investigate future mysteries, and I am eager to get to the next book and beyond.