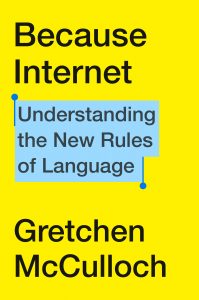 Because Internet is subtitled Understanding the New Rules of Language. It is one linguist’s efforts to study and learn the effects of the Internet on the use of English, particularly in Canada (the author’s home), US, Britain, and Australia. This is a delightful book, with a sometimes humorous and always indulgent examination of what makes Internet English differ from spoken or written English in other contexts.

Most Internet writing is informal. Obviously there are many exceptions, but when you weigh the entire volume of posts from Facebook, Twitter, Instagram, YouTube, etc. against the occasional formal email or document it isn’t close. The Internet also skews toward younger adults and teens, particularly in evolving forms of social media. These two realities combine to make for a very fluid language dynamic. Teens have always been known for their esoteric slang, a language that is designed to include other teens and exclude adults from their conversations. (I tried to use a word I had learned on a teen friend of mine a few years ago. He looked at me in disgust and said, “That was so five minutes ago.” I deserved that.) As the technology changes from Usenet to Facebook, from pressing cell phone keys multiple times to smartphones, the language and conversations change with it.

I loved the chapters on emojis and memes. McCulloch traces the idea of memes back to long before computers. The seemingly ubiquitous “Kilroy was here” from World War II era graffiti could be considered a meme. A similar history can be traced for emojis. People have for centuries decorated their books, correspondence, etc. with colors, pictures, and other personalizing touches. The fact that technology now makes those pictures both possible and customizable does not mean they are new.

The most important point McCulloch makes is that the Internet is not the harbinger of an English apocalypse. Every new technology and innovation has brought with it a wave of doomsayers. The arrival of the printing press. The creation of dictionaries. The advent of the telephone and television. Each of these things contributed to change and adjustment in our speaking and writing, but none of them signalled the death knell for the language. Neither does the Internet. If it ushers in a new era of more informal speaking and writing, meh! Who cares? There will still be academic treatises and formal business letters where one can go to get their fix of stuffiness.

Because Internet is amusing (if not lol), charming, and occasionally rude. Of course, the internet is all of those things as well, so the book is quite appropriate for its subject. McCulloch is an engaging writer whose work appears regularly in Wired and other magazines. She may be an academic, but this book is written for a lay audience. That is not to say it lacks seriousness or depth. It has both. McCulloch takes her subject quite seriously. Herself, not so much. That makes for an informative and delightful read.