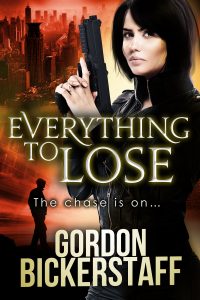 Agent Zoe Tampsin is everything you want. Smart, tough, resourceful, caring. Brought into the Lambeth Group for her many skills, she is given an assignment that may be tougher than the many battles she has survived: babysitting a scientist.

Gavin Shawlens has worked with Lambeth Group before. Lambeth Group is a secret arm of the British government charged with protecting the country from harm. Shawlens is a scientist, still grieving from a personal tragedy. Despite this, he is sent to investigate claims of a performance-enhancing drug that is just too good to be true.

Shawlens has already incurred the enmity of a powerful billionaire who will stop at nothing to see him dead. What he does not know is that he has also attracted the attention of a secret department in the US government, attention that could also be fatal. And very quickly his work investigating the PEDs draws him into the web of two criminal groups, either of which are willing to kill him if he does not cooperate.

Agent Tampsin has never had a job quite like this one.

Gordon Bickerstaff is one of those authors who is not afraid to throw everything at his characters. Government conspiracies, criminal gangs, illegal drugs, kidnappings, Nazi plots, assassination attempts: the list of enemies and obstacles grows through almost the entire book. I suspect that somewhere within the Lambeth Group novels the characters will have to dodge flying kitchen sinks, as that is one thing the author did not throw at them here.

A nice distinction between the two protagonists helps define them. Shawlens is not exactly soft. He is skilled in judo. But he is a scientist. Facts and analysis are his tradecraft. His judgment when it comes to aspects of personal safety or aggressive team action is questionable at best. Tampsin is just the opposite. Skilled in the arts of war and combat, talented as an undercover operative, she lacks the education (though not the intelligence) to complete this mission. She needs Shawlens’s mind as much as he needs her skills. Together they make an interesting team, one that generally likes and respects each other but also one that sometimes frustrates and confuses the other.

There are now seven novels published in the Lambeth Group series. Because of the blog tour I have stepped into the middle of the series, but all of them promise the same high voltage action and constant twists that this one provides. A thriller about two agents facing threats from seen and unseen enemies, confronting scientific advances that could shape or destroy their country: sometimes that’s exactly what you need on a rainy afternoon. 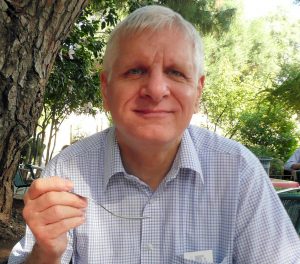 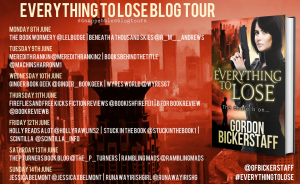 Our thanks to blog tour organizer Emma Welton of Damp Pebbles Blog Tours, author Gordon Bickerstaff, and publisher Histameen for our copy of this book solely in exchange for our review. The opinions, as always, are solely those of Scintilla.Info.

2 thoughts on “Blog Tour: Everything to Lose, Gordon Bickerstaff”