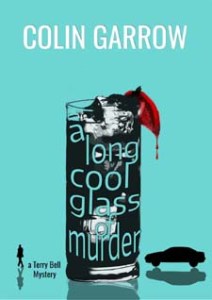 Terry Bell is not a detective. He drives a taxi. Still, his role in solving a previous crime has given him a bit of a reputation, and a woman approaches him. She says her name is Tina Overton and that her husband is trying to kill her.

All of which proves to be awkward when Terry finds the woman murdered in her home and the police find him with the body. Even more awkward is when the real Tina Overton appears and claims to know Terry. Nobody seems to know who the dead woman is. Although the police suspect that Terry is somehow involved, they do not have any evidence to keep him.

Terry and his girlfriend Carol begin to do some sleuthing, and very quickly the action kicks into high gear. There are more deaths, kidnappings, assaults, and a list of nefarious characters that grows almost throughout the book. Add to that betrayals from friends and a shrinking list of people they can trust. It’s no wonder that Carol says, “I hope you’re right, cos I’ll be really annoyed if I get stabbed.”

As a first person recounting by Terry, the novel uses plenty of slang and Britishisms that add a lot of flavor to the dialog especially. Still, even for this American it was not hard to follow. Author Colin Garrow does a good job using context and description to make the meaning clear. On the few occasions where it wasn’t, well, that’s why God gave us Google, isn’t it?

Unlike the first novel in this series, Terry’s own secrets and reticence in sharing them are not a factor. This is largely because of the increased role played by Carol. She is far from just a sidekick. She is an integral part of the team, facing danger willingly and with a quip at the ready. Although Terry is clearly the protagonist, Carol becomes his right hand, offering help and support and ideas and moxie. I liked her presence in the first book. I adored her in this second.

We also find more depth in Terry during this novel. He (and Carol) are quite well-read. They sometimes use their blue-collar jobs and broad accents to encourage people to underestimate them, but they are both smart and aware.

Some years ago I worked in a retail store. A college professor came in, one who had written a textbook for one of Maria’s doctoral classes. She had shared the book with me and I was quite taken with his approach to his subject. When I asked him whether he would sign it for us, he looked at me in surprise and said sotto voce, “I never thought about my book being read by someone in your position.” I did not take offense; textbooks are seldom read outside of classes and my academic days were sadly well behind me by then. In my now many years in jobs that don’t require a degree, I have found many people who are not only quite intelligent but who have also worked hard to educate themselves outside of a formal school. Reading about Terry and Carol reminds me of many of those friends, people whose wisdom and intelligence cannot be measured by their grades or their degrees and whose education did not end when their classes did.

A Long Cool Glass of Murder is a terrific mystery, with unique characters, sharp and often funny dialog, sudden twists, and plenty of action. Colin Garrow has a nice series going. I am looking forward to reading his next book as well.

Our thanks to the amazing Emma Welton of Damp Pebbles Blog Tours and to author Colin Garrow for our copy of this book. We are participating with Damp Pebbles in the blog tour for his newest release in this series, The Jansson Tapes, on June 12, 2020. They were kind enough to provide the first two books to give it context and possibly keep us from whining about starting a series in the middle! Regardless, we appreciate it, and the opinions given are solely those of Scintilla.Info.

One thought on “Book Review: A Long Cool Glass of Murder, Colin Garrow”