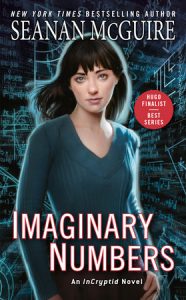 It is a testimony to both the volume and quantity of books Seanan McGuire writes that I am only now featuring one from her InCrypted series. Nominated for the Hugo Award for best series, InCryptid tells the stories of a family who lives on the knife’s edge between humans and non-human cryptids. The Price family and their descendants sometimes find themselves hunting–and killing–cryptids. They sometimes find themselves marrying them or adopting them. Many cryptids just want to be left alone to live their lives in obscurity. Some, though, want to eat us. Or worse. It makes for a complicated situation.

Sarah Zellaby is a Price by adoption. Found along the road as a child, she looks human. She is not. Sarah is a cuckoo, or more formally, a Johrlac, more akin to a parasitic wasp than she is to a human. Raised in a family that includes another cuckoo, a revenant (a reanimated amalgam of several corpses), an incubus, a succubus, and a couple of sorcerers among others, the crueler aspects of her nature have been muted.

Johrlac are telepathic predators. They take what they want when they want it and they are not opposed to leaving bodies behind. In fact, they like that. Sarah has turned her back on that nature. She is a Price, using her powers for good and not harm. Mostly. I mean, the airline can afford to comp a first class ticket to Portland, right?

Five years ago, Sarah rescued her sister Verity by using her telepathic powers. Afterward, she had a breakdown. Not even able to speak for a while, she has gradually regained her strength and her powers. Now, she is attempting her first solo trip across the country, flying from her Ohio home to her aunt and uncle’s house in Portland, OR. She especially wants to reconnect with her cousin Artie, who has been her best friend and not-so-secret crush since they were ten.

Arriving in Portland, she realizes the airport is the hunting ground for another Johrlac. And they don’t share. Escaping, she soon discovers that there are even more cuckoos in the area, and they want her for something. Soon she faces a choice: fight them and watch her family get killed, or go with them. The thing is, doing what a cuckoo wants you to do is the very definition of a bad idea. Sarah’s decisions will have consequences far beyond what anyone could expect.

The InCryptid novels each feature a member of the Price family, a family that includes the ghost Rose from the Sparrow Hill Road novels. Some characters have more than one novel to tell their stories. Others (so far) just have one. Although this is book 9, I definitely had enough backstory to catch up even though I have only read a couple of the others in this series.

It feels like I am damning her with faint praise when I say that Seanan McGuire is creative or inventive or even brilliant. She is all of those things and much more. She creates memorable characters, mind-bending worlds, and complex plots. She keeps a toe in both the horror and sci-fi genres even in her fantasies. During the last few years, she has become one of my favorite writers.

In May, 2020, I (David) had pancreatitis and my gallbladder was removed. This was during the height of the COVID-19 pandemic, so I was not allowed visitors. My wife (Maria) was able to drop off a small care package. It had two things in it: my phone charger and Imaginary Numbers. Of all the books we had available, she knew that the one which would bring me the most comfort was one by Seanan McGuire.

If you have not been reading Seanan McGuire, you are missing one of the best authors of urban fantasy alive today. I would probably recommend starting with the beginning of one of her series, but there really is not a wrong place to start reading her work. And hey, after the math trauma I experienced as a trig and calc student in high school, anyone who can get me to love Imaginary Numbers has a true gift.