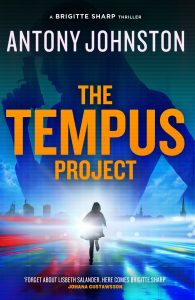 The Tempus Project is the second novel featuring protagonist Brigitte Sharp. Sharp is a British agent with multiple skills. Although her work takes her into the field and occasionally requires the use of her karate, her love and gift is in computer hacking.

A British MP falls victim to a computer attack, forcing him to erase his hard drive. Later, though, secret documents from his laptop are published online, forcing him to resign from several committees.

A journalist is fleeing Tallinn, Estonia. He is trying to bring information to the UK about a secret hacking group sponsored by Russia. Sharp and her team are charged with conveying him from Paris to London. Something goes horribly wrong, though, and the consequences lead to Sharp’s demotion from team leader.

Soon thereafter, a hacking attempt is made on attendees at a G-20 summit in London. Sharp and some colleagues are able to head off this threat, in part because she recognizes code from the attack on the MP. She also sees connections to the information provided by the journalist. However, the connections are not definitive and her reputation is no longer intact. Proving the matter may require going rogue…a move which could permanently end her career.

The Tempus Project is a whip smart story focused primarily but not exclusively on the protagonist. Author Antony Johnston does not assume that his readers speak “hacker,” but he does assume they will keep up as he brings them into that world. He never dumbs it down for his readers. Instead, he uses characters within the book who are highly intelligent but not educated in that specific field to receive explanations of what the hackers are doing. It’s a clever device that let this reader pretend he was smart enough to understand what was going on. I love it when authors presume readers are intelligent and can be taught. I am not quite ready to turn my laptop into a cryptocurrency center, but at least Johnston treats me as though I can comprehend the vocabulary.

That may be a self-delusion, but it’s a nice one.

As I was reading this book, my 24-year old son sat beside me on the couch and began listening to his iPad. A voice with a British accent began speaking. “This is Antony Johnston.” I found myself in the strange situation of hearing his voice in my ears and reading his words on the screen. Rather quickly, the words on my screen meshed with the sound of his voice and I was now reading it with his voice narrating the action.

Antony Johnston is known for many things. Graphic novels, video games, and movies are among the projects bearing his stamp. In our house, though, the Incomparable Network of podcasts is his claim to fame. Our son is a member (or whatever they’re called) and gets their behind-the-scenes episodes among other things. So I have had Antony Johnston’s voice in my ear for a few years. (NOTE: Also a part of the Incomparable Network is author Dan Moren, whose books we have also reviewed on Scintilla.)

It’s a good voice to have narrating a great story.

I have recently been reading a number of thrillers with strong female protagonists. The Tempus Project ranks as one of the best among them. A multi-faceted plot with complex characters and complicated relationships, Johnston takes his readers on both an international adventure and an intellectual experience.

Maybe I can borrow his voice to narrate some of my other books as well. 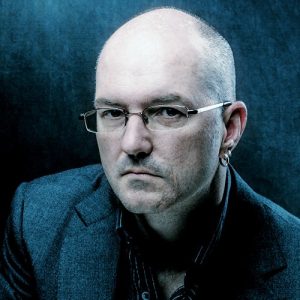 Our sincere thanks to Emma Welton of Damp Pebbles Blog Tours, author Antony Johnston, and publisher Lightning Books for our copy in exchange for an honest review. As always, the opinions are entirely those of Scintilla.Info.

One thought on “Blog Tour: The Tempus Project, Antony Johnston”