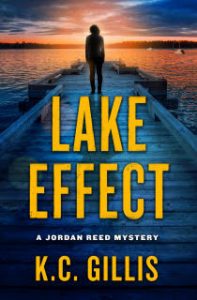 I am a sucker for well crafted female protagonists. K.C. Gillis delivers just that with his Jordan Reed mysteries. Lake Effect is the second novel so far (as well as a novella available directly from the author) and it is terrific.

Jordan Reed is an investigative journalist. Having recently completed a major story (the plot from the first book, Toxic Deception), she is exhausted. Burned out. All she wants is a vacation.

Then her friend and one-time fiance Travis shows her some pictures sent to him by a friend. They reveal a fish kill, roughly 100 fish dead in a remote lake known for its picturesque marina and relaxing atmosphere. Three things separate this fish kill from others which happen all too frequently in our world. One: these fish are deformed. Mutated. Something is clearly wrong with them. Two: no other nearby lakes or streams have reported any similar incidents, meaning that it is something fairly isolated. Most troubling of all is three: someone cleaned up all of the fish and made them disappear without alerting authorities.

Despite her desire to just be left alone, Reed cannot let this go. She goes out to the lake, where she finds multiple issues. The local police chief is very opposed to having her investigate anything. He is hostile and obstructive at every turn. The marina is experiencing a series of mysterious “accidents”: unmanned boats crashing into the pier, an unmanned forklift running into a building. Some other unlikely visitors are also at the marina: a high-powered political operative for an ambitious state senator and a “fixer” for a New Jersey mob family have both come into town. But are any of these things related to each other? Is there one story here, or more than one, or none at all? Can she get the proof she needs to publish? And what might happen to her personally if she does?

There is a lot to like in this book. The plot is solid. Details emerge in pace, allowing the reader to discover things with Jordan. Surprises abound, right up to the very end. The writing is quite good. Everything about this makes it a good entry in the mystery/thriller genre.

What sets it apart is the character of Jordan Reed. She is tough, determined, world-weary, at least borderline alcoholic, and smart. Although that describes any number of thriller heroines, making her a journalist instead of a detective gives a very different perspective. She ultimately has to answer to editors and lawyers about what she publishes–which creates a much messier and less resolved ending than we often see in books. That’s good! The bad guys don’t always get what’s coming to them, the good guys don’t always get a clear win, and sometimes even a victory brings hurt and damage to the victors. Undoubtedly we will see some of these villains in future Jordan Reed novels. Some of them have more damage yet to do.

Lake Effect is a very good book with an excellent protagonist. Definitely one for mystery and thriller fans to add to their collection. I look forward to future adventures of Jordan Reed. I suspect there will be quite a few to come. 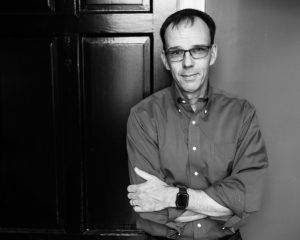 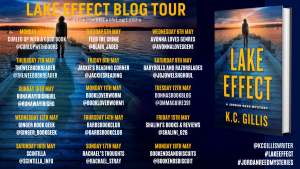 Our thanks to Emma Welton of Damp Pebbles Blog Tours, as well as author K.C. Gillis and publisher Chesterfield Press for our copy of the book, provided in exchange for a review. The opinions are entirely those of Scintilla.Info. Our deepest apologies to all of them for missing the original posting date.

K.C. (Kevin) Gillis is the author of the Jordan Reed mystery series. Despite being a lifelong lover of stories and books, writing took a distant back seat as his professional career travelled through the Canadian Air Force, a decade as a chemist, followed by a long and continuing run in corporate America. With writing no longer in the back seat (but not quite yet in the front seat), Kevin now has the Jordan Reed series well under way. His personal interests focus on endurance and water sports. Having grown up in the Canadian Maritimes, he now lives in the US northeast with his wife, teenagers and a pair of black cats.