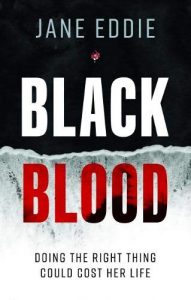 Danni Ross is trying to survive during the oil price downturn which has greatly affected Scotland. Having fled London a year before, changing her name and appearance and dropping connections to family and friends, she is just trying to keep her job, keep her head down, and above all keep off the police radar. Her ex-boyfriend, Mark, was a London cop who threatened and violently abused her. She would do anything to never see him again.

Danni works for an oil company in Aberdeen. Russians have taken it over, and budget cuts have everyone on edge. Jobs are hemorrhaging, paychecks are shrinking, and nerves are fraying. When the company’s former CEO is found dead in the forest from an apparent suicide, he seems to be just another victim of the stressors of the times.

But Danni has become aware of some secrets within her company, secrets that could get people killed. Have these secrets claimed a victim? And if she tells, will she have to betray her own secrets, secrets which could themselves kill her?

This book benefits greatly from the inside knowledge of the author. Jane Eddie has lived through the North Sea Oil booms and busts. Although the book is set in a very near future post-Brexit world, it is essentially a survival story of one woman against incredible odds. The setting, though, is almost as desperate as the woman. The Aberdeen of this story is cold and harsh, economically depressed, gloomy even in the midst of Christmas, struggling to find its identity in the new world. In many ways, Danni has “escaped” into a town that reflects her own struggles. Abused and beaten, finding a new identity, struggling to make ends meet, her own turmoil reflects the turmoil of the community itself.

In many ways I found Danni to be a compelling and identifiable character. It is nice to read about heroines and heroes who are always finding the means to transcend their situations and triumph through force of will, intellect, strength, or leadership. Most of us, really, just aren’t that cool. We have great ambitions, we have good intentions, but we have flawed execution and failed implementation. Danni has been beaten down. All she is looking to do is survive. She does not want the responsibility of her company’s secrets. She does not want to be a heroine. She just wants to wake up without fear, work without drama, live without guilt. When she first begins to discover the truths her company wants hidden, her first thought is to flee. Run away. And through a series of missteps, that flight lands her in the place she most wants to avoid: the police station. That sounds like a plan I can relate to: one that fails entirely and has the completely opposite effect desired.

Black Blood is not really a “mystery,” in the sense that the players and roles are known relatively early on. This is not the story of the police solving the crime. This is a story of survival, one woman against her past and against her present. The story of how she survives is well worth reading. 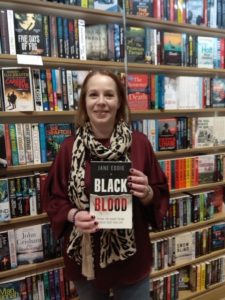 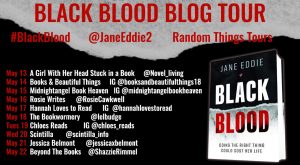 I want to thank the author, Jane Eddie, the publisher Book Guild Publishing Ltd., and the indomitable Anne Cater of Random Things Blog Tours for my copy of the book in exchange for an honest review.