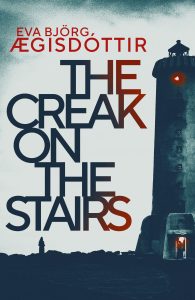 Mystery: The Creak on the Stairs, Eva Bjorg AEgisdottir; translated by Victoria Cribb

I am beginning to love Nordic crime novels. The Creak on the Stairs has just been translated into English, and it is brilliant. Elma has returned to her hometown of Akranes, Iceland. Her long-term relationship with a man in Reykjavik is over and she needs somewhere to heal, somewhere to be restored. Her parents and sister still live in Akranes, the local police department has an opening, so she comes home to begin finding herself anew.

When a young woman’s body is found on the beach, clues are sparse. She has no ID. Her fingerprints are not registered. No car or cell phone is found. She has obviously been murdered, but Elma and her colleagues do not have any good leads to start. Then, a break comes in the form of a missing person’s report. They have an ID, a woman who spent her childhood in Akranes but had very little contact with the community since moving away as a little girl. What brought her to Akranes, now? Were the answers in her present life as a wife and pilot? Or were they buried somewhere in the past?

AEgisdottir does a brilliant job weaving flashbacks from the victim’s childhood into the story, revealing enough to keep the reader slightly ahead of the police investigation but not revealing too much. We learn of the victim’s painful childhood, of secrets in the community that powerful people want to keep hidden, of previous crimes and misdemeanors that were glossed over because the “wrong” people were victims and the “right” people could get away with things.

The book also peels back the layers of Elma’s life. The picture of the young woman at the beginning of the novel is a very different image than the one at the end. The reasons for this become clearer as the book moves on. I found myself very taken by this protagonist. She is clearly intelligent and hard working, damaged and resilient, a fully realized character finding herself in the midst of finding the truth about her victim. I love that she is not the brilliant clairvoyant walking through the scene in Holmesian dispassion declaring, “That spot is proof that the assailant was 5’3” wearing hunting boots purchased in Manchester,” or something like that. Instead she is smart, resourceful, trusts her instincts, puts in the hard work to uncover clues, and in the end is surprised by the turns of fate.

If we have learned anything during this pandemic it is that real life is messy. I live in the United States. I have friends who (like me and my family) have basically stayed indoors throughout. We venture into the community for necessities: food, gasoline, emergency trips to the hospital (I’ll write about that later). One son is home from college. I don’t know that he could tell you what the sky looks like any more. Our other son works nights at a local grocery. My wife is all but furloughed; her training job has almost evaporated. And I am able to work from home. We are very, very lucky.

Others are not. I am very sympathetic to those who feel the desperation of lost jobs, of missing personal connections, of uncertain futures. I wish we lived in a society that cared more for its people than ours does. Reality is a sometimes ugly mix of competing facts. Staying at home is safer. Staying at home could destroy your income. In a country with a poor safety net (at best), no universal healthcare, and few guarantees for workers, people are literally choosing between staying under the roof over their heads and keeping that roof over their heads.

The Creak on the Stairs, as much as any novel I have read, embraces that messiness of reality. Unlike TV procedurals which tie everything up in an hour, not every loose end is resolved. Just as the victim herself had a brutal past, a past which shaped the person she would become, the past and present of others in the book greatly affect their choices and the outcomes of those choices. If you are looking for a well-written procedural with outstandingly complex characters and a plot that leaves you wanting more, The Creak on the Stairs is a fantastic choice. 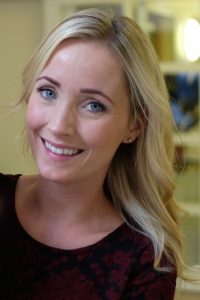 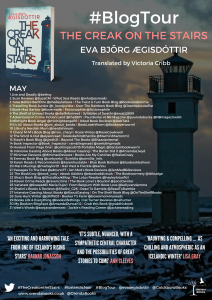 Our sincere thanks to Anne Cater of Random Things Blog Tours, author Eva Bjorg AEgisdottir, and Orenda Press for supplying our copy of The Creak on the Stairs in exchange for our review.

One thought on “Blog Tour: The Creak on the Stairs, Eva Bjorg AEgisdottir”