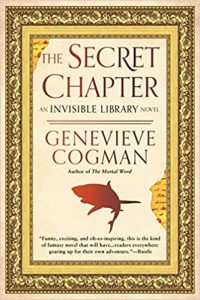 Irene the librarian and Kai the dragon have returned home to find someone in their quarters. It seems that Irene’s oldest foes have tracked her down and have let themselves in. Indeed, they are waiting for her return.

Yes, her parents have come to visit.

The visit is quite brief, though. They are also librarians, and have come to inform Irene that she must return immediately to the library to receive a new assignment. The world where she spent much of her childhood, where she attended school, is in grave danger. A book, missing from that world, must be retrieved and returned or the world itself will degenerate into chaos. That book is in the hands of a well known thief and con artist, one who might be willing to make a trade but certainly will not part easily with the book. So, Irene and Kai follow the trail to the criminal’s tropical island lair, where they are given a new mission: work with a team to steal a unique painting and bring it back, and the book will be theirs.

If you are still with me in this description, then you can imagine what hijinks ensue. Genevieve Cogman has worked for six novels to build a strange and madcap multiverse, one with dragons and fae at odds, and an invisible library that works to maintain the balance of powers. Admittedly it is delightful to imagine that a secret library holds the key to the universe remaining whole. Even more delightful is the thought that a single book taken from one world could result in its dissolution–and that returning that book to that world could save it from that fate. For those of us who love to read, the entire premise is the stuff of heady dreams.

Most humans are blissfully unaware of the great powers that influence their worlds. Worlds under the fae influence are “high chaos.” Worlds under draconic sway are “high order.” Many worlds are somewhere in-between, perhaps leaning one way or the other, but not fully part of either sphere. The rules change from world to world, but certain things remain consistent: Irene must use her powers and intelligence to save the day, Kai remains her faithful and vigilant protector (except when Irene has to rescue him, which is usually once or twice per book), and things will not go according to plan.

Like, waking up in a prison wearing a bikini was definitely NOT part of the plan!

Cogman’s imagination is delightful, her gift with words is special, and her plots are fun and often unpredictable. Oh, some things can be predicted, but she always saves a few twists to reward readers at the end. The Invisible Library is a wonderful series, Irene is a special heroine, and The Secret Chapter is a charming addition to any library.