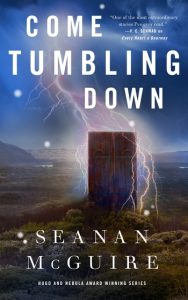 We’ve met Jack and Jill before in the Wayward Children series. Born to parents who tried to mold their daughters into their ideal of the “perfect” child, they escaped by finding a doorway to another world. In the Moors they were able to discover their true identities. Jack became apprentice to a scientist, using a combination of technology, medicine, and magic to conduct sometimes chilling experiments. Jill became “daughter” to the master of the manor: a vampire.

When they returned to the world of their birth, the girls no longer conformed to their parents’ expectations. So they were sent to Eleanor West’s Home for Wayward Children, a place for those who had visited other worlds and been changed by them forever. There, Jack continued her scientific education. Jill also continued her own studies. Those usually ended up in murder.

Realizing that Jill would never be able to stop killing, Jack stabbed her and then returned to the Moors with her body.

In Come Tumbling Down, Jack returns to Miss Eleanor’s school with her betrothed, Alexis. There is a difference, though. Jack has returned…in Jill’s body. Jack had resurrected Jill using scientific necromancy. Jill had focused her thoughts on revenge. And switching bodies was only the beginning of her plans, plans which threatened the entire world of the Moors should they come to pass. Jack needs help. And her former classmates from Miss Eleanor’s school were the only ones who could provide it to her.

Anytime a new Seanan McGuire book comes out there is rejoicing in our house. Our son owns all of her InCrypted series either in paperback or ebook–sometimes both. This blog has numerous reviews of her books, both stand-alones and series. A multiple award winner, she is a marvelous, creative writer who has provided hours of enjoyment to our family.

This may be the best of the Wayward Children series. Considering how good the series has been from the very beginning, that is an achievement. Jack’s character shows darkness and light, love and wrath, affection and disdain. She talks poignantly about being trapped in a body that is not hers, echoing the feelings of the other children who are trapped in a world they know they do not belong in. Jack and Jill may be identical twins, but age and time have weathered their bodies into something that uniquely belongs to each of them. Jack misses her muscles, her stamina, but most of all she misses being truly clean. She knows what Jill has been for her vampiric master. Wearing a body that has served those needs repulses her. She wants to scratch her skin off, peel down to the bone, erase every imagined fingerprint left on her body, every visible bite mark on her neck, every trace of Jill’s life from the body that clothes her. Of course, she can’t.

One of the characters observes, “…we knew it was going to be terrible when we followed a mad scientist and her dead girlfriend to a horrifying murder world, but this is bonus terrible. This is the awful sprinkles on the sundae of doom.” She was commenting on the situation our protagonists were facing, but the entire book carries the weight of the “sundae of doom.” It is a dark fantasy. Not quite dark enough to be a horror novella, but certainly closer to the actual Grimm fairy tales than to anything Disney would approve. The doors Miss Eleanor’s students find do not take you to Narnia. Their worlds are colder, harsher, crueller, and Aslan does not stride in to save the day.

The books do open doors to fantastical ideas. They welcome you to imagine the world in which you would fit perfectly, with all its joys and sorrows. Come Tumbling Down is a masterpiece of imagination. Read it and wonder.