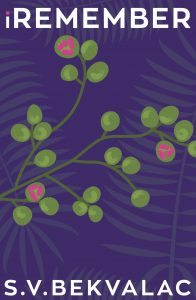 A quick note before we begin. As we prepared this post we were sorry to learn that Rachel Gilbey, the blog tour organizer, had taken ill. The good news at this time is that she is recovering and hopes to be released soon from the hospital. We are grateful to her for the invitation to participate in this blog tour, and hope that she makes a fast and complete recovery.

We are honored to be part of our first book tour with Rachel’s Random Resources, and reviewing the debut novel from S.V. Bekvalac. iRemember is a quirky, strange, and gripping science-fiction/noir mashup. The official blurb about the book does not really capture the spirit of the novel, but read it yourself below. My review will follow the blurb.

The city of iRemember shimmers in the desert haze, watched over by the Bureau, a government agency that maintains control through memory surveillance and little pink pills made from the narcotic plant Tranquelle.

It looks like an oasis under its geodesic dome, but the city is under siege. ‘Off-Gridder’ insurgents are fighting to be forgotten.

Bureau Inspector Icara Swansong is on a mission to neutralise the threat. Her investigation leads her into iRemember’s secret underbelly, where she finds herself a fugitive from the very system she had vowed to protect. She has to learn new rules: trust no one. Behind every purple Tranquelle stalk lurk double-agents.

A sci-fi noir with a psychedelic twist, iRemember explores the power the past holds over us and the fragility of everything: what is, what once was, and what will be.

The blurb does not do a bad job of summarizing the general plot. But it completely fails to capture the quirky and witty style of the author. Bekvalac has a unique voice. She is not afraid to defy convention and create new rules as she goes along. The book begins in a desert holding facility for memories. For several chapters it appears to be about Lucian Ffogg, a bureau employee in charge of the facility. Icara Swansong comes along later and is almost an incidental character until calamity strikes. Then the novel essentially leaves Lucian for long periods of time as it follows Icara and two other characters. Lucian makes the occasional appearance, but his time at the center of the novel finishes and he is relegated to the edges.

Icara comes from iRemember royalty. Her grandmother is the ruler of iRemember, a formidable figure whose shadow extends into every corner. Her mother was the head of a powerful Bureau department. Icara believes in her city and what it stands for.

What constantly surprised me about the novel was the willingness of the author to experiment. Sometimes she writes in a stream of consciousness style as memories overwhelm a character. She begins the novel setting up one character as the protagonist, then suddenly switches to another to carry the story forward. It is bold, creative, and daring. Occasionally, I got confused, but as I continued the novel sorted out my confusion. Bekvalac has a very different voice than most novelists. I am intrigued to see what she does next.

iRemember is a bold experimental work that stands out from the sameness that marks many other novels. It may not be to every reader’s liking, but if you are looking for something different, smart, and creative, Beklavac is an author to watch for. If this is her debut, look out!

SV Bekvalac was born in 1987 in Croatia, in what was then Yugoslavia, but grew up in London.

She studied German and Russian at Oxford, and went to film school in Prague. After almost becoming a film-maker and then an academic, researching cities and films, she found herself writing fiction about cities instead. She started off with screenplays and short stories, but they got longer and longer. iRremember is her first novel.

She has lived in cities all over Europe. Now she lives in London, or in one of her own imaginary cities.