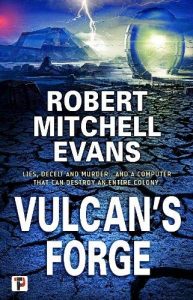 Set in the far future, Vulcan’s Forge starts with a mysterious theft. A man has stolen the Vulcan’s Forge. We don’t know what it is, why he wants it, what it can do, only that it is powerful and valuable and its owners are desperate to get it back. With that prologue hanging over the story, we then meet Jason. A young man whose job is to show movies and discuss them with audiences, Jason is a generally well-meaning person without much purpose in life.

This is a major problem on the planet Nocturnia, where purpose defines life. Nocturnia is reminiscent of a Christian theocracy, where the law prohibits sinful acts such as sex out of marriage. Every person’s responsibility is to marry, procreate, and help rebuild the human population in its new interstellar home.

Jason has delayed marriage, but finally his girlfriend Seiko and his buddy Brandon have convinced him to settle down and set a date. Just at this point, though, a problem arises.

Pamela is stunningly beautiful, daring in her fashion choices among a very conservative populace, and really into Jason. With very little effort, Pamela sweeps Jason off his feet. She is willing to flout the law, flout convention, and cater to Jason’s every sensual dream. Before he knows it, he is swept into a world of trouble that threatens his job, his place in society, his girlfriend, and possibly his life.

Robert Mitchell Evans manages to create a world that is both a caricature and frighteningly believable. Nocturnian society is not just prudish. It is a fundamentalist’s dream. Church attendance is virtually mandatory. Sin can lead to expulsion from the community, and on a world where native plants and animals are inedible, expulsion leads to certain death. Jason wants to watch movies that feature racier and adult themes. However, media is strictly monitored. Watching such films is not just illegal, it is virtually impossible under the strict guidance of the government. Behavior is monitored. Travel is monitored. Illegality is rare, because it is so hard to get away with anything. It does exist. But it is buried deeply.

Jason is a very believable protagonist. He is not a bad guy. He means well, loves his girlfriend, supports his friends, works hard at his job. He is weak. It does not take Pamela a lot of effort to sway him to betraying Seiko. Pamela convinces Jason to do even more as the novel progresses. But he is in love, and young people in love will do many things for their lovers.

Under the guise of a science fiction novel, Evans has written a character study about a man discovering who he truly is. Jason’s journey is a painful one, and there are times when I wanted to yell at him, “Don’t be an idiot!” Then again, I am the father of three boys in their twenties, so that reaction is not a completely foreign one to me. As the plot develops and the threads are drawn together, the book becomes more and more exciting. The end was surprising, satisfying, and quite fitting. Sometimes finding yourself is not the adventure you hoped it would be. 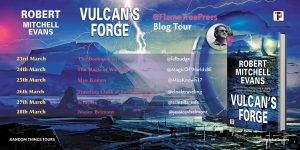 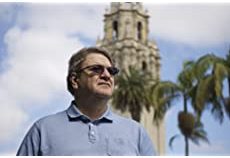 My thanks to Flame Tree Press, Robert Evans Mitchell, and Anne Cater from Random Things Blog Tours for letting me read this book in exchange for my review. For more reactions to this book, check out the other bloggers participating in this tour.