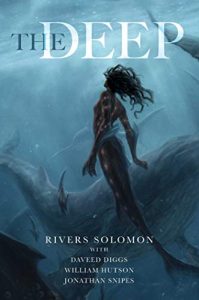 This is a short book that speaks volumes. Inspired by a Hugo nominated song by the experimental hip hop group Clipping (a song which itself was inspired by Drexciya and was written by commission for the NPR show “This American Life”), The Deep tells the story of Yetu, a part of the undersea Wajinru. The Wajinru are the descendants of African women who were pregnant when they were captured as slaves and sent to the Americas. Many of these women were simply thrown overboard so the ship captains and crew would not have to deal with a woman giving birth during the voyage.

Drexciya, then Clipping, imagined what might be if the babies of these women were born able to breathe underwater. Would they grow up? Form some sort of bond with each other? Perhaps build a society? Their creativity built the framework that Solomon uses for their novella.

Yetu holds a unique place in the Wajinru society. Her title is “historian.” She holds the memories of the people, memories which threaten to overwhelm the people and so are entrusted to one person in each generation. However, those memories threaten to unravel Yetu. Remembering the lives of every one of the Wajinru who lived, from the time their mothers were thrown into the sea until the present, is more than she can bear. Her journey to surviving that burden is the journey of the book.

I do not want to give away spoilers, so let me just say that although the book is short it took me a couple of days to read. It is a challenging book. The slave trade is a disturbing enough theme on its own. To confront the realities of women, people, being thrown into the ocean for being sick or being pregnant is not a pleasant truth. It is a necessary story, one that we need to know and embrace whatever our ancestors’ role in this practice (or even if they had no role at all). But there were times when I just had to put the book aside and breathe.

Rivers Solomon is an extraordinary writer. They are able to take difficult stories and put them into beautiful words. I reviewed Solomon’s first book, An Unkindness of Ghosts, shortly after we began Scintilla, so returning to their work almost two full years later is special for me. I could personally wish they wrote more, but that would be selfish on my part. When the output of two years is something as profound and extraordinary as The Deep, it is best to just be grateful that their voice is speaking out in whatever capacity they choose.