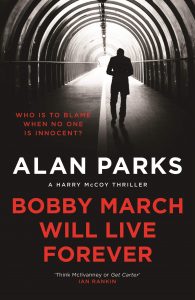 Janis Joplin. Jimi Hendrix. Jim Morrison. Kurt Cobain. All famous musicians who died at the tender age of 27. In 1973, Glasgow’s own Bobby March joined this unfortunate group in death, overdosing in his hotel room. Bobby March could have played with the Rolling Stones. A friend of Keith Richards, March was a gifted guitarist who, when he was at his best, was one of the best ever. Sadly, he was seldom at his best. A career derailed by drugs and alcohol, his life also derailed by the same addictions.

Detective Harry McCoy was a fan who attended March’s last concert. The next day, he was called to investigate his death. Was it simply an addict who overdosed? Or was it more than that.

As dramatic as the death of a native famous rocker might be, the papers and the public’s fascination was gripped by another crime. Twelve-year-old Alice Winters has been kidnapped. Taken in broad daylight, a frightened community wants results. Politicians want results. Police want results. Just how far will they go to get them?

Alan Parks draws a picture of a detective and a community that are pulled strongly toward the darker side. McCoy himself is a jaded veteran, propped up by alcohol and friendly toward some of the seedier elements of Glasgow. He may not be corrupt, but he is willing to aid criminal friends without himself engaging in illegalities. He is sidelined during the search for Alice Winters by a vindictive former partner, a decision that becomes pivotal later. Instead he is investigating an OD by a formerly great musician and a string of bank robberies…and searching for the lost teenaged niece of his friend and mentor. This gives him plenty of opportunities to find and create trouble for both the police and the criminals of Glasgow.

Parks focuses less on the police procedural aspects of the mystery than on the character of Harry McCoy. McCoy does do the job, sometimes brilliantly, sometimes doggedly, sometimes by sheer good (or bad) fortune. But this book is more a character study of someone trying desperately to live by his own moral code in the face of challenges from various directions. His job is to investigate the OD — but what if the clues point to old friends? His job is to find the missing teenager — but why did she run away to begin with? His job is to fight crime — but what if one of his oldest friends is a local mobster? McCoy walks a fine line, refusing to overtly break the law, but sometimes willing to bend it when it suits his innate compass.

This is a dark and gritty story. Bobby March dies, but in the sometimes twisted world of fame and notoriety, a rocker suddenly dying in his youth may mean he will live forever in the public’s consciousness. In this novel involving a kidnapped tween, a runaway teen, and a cop on the brink, the opportunities for an infamous eternity abound. 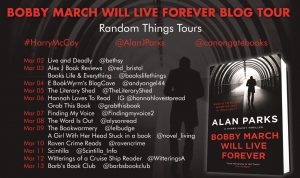 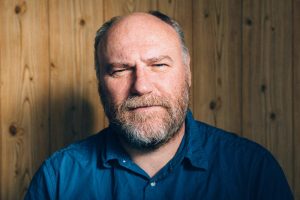 I want to thank Alan Parks, Anne Cater, and the publisher for giving me a copy of this book to review. The thoughts and review are my own.