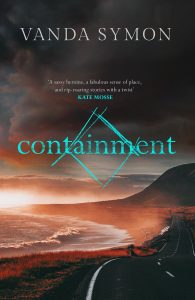 Containment is part of a series of detective novels by internationally renowned author Vanda Symon. Set in Dunedin, New Zealand, her protagonist is a smart, sassy, complicated young detective named Samantha (Sam) Shephard. Shephard is called to the scene of a container shipwreck, where the locals have gathered en masse and some have begun stealing the contents of the containers which have spilled over the beach. The police are called to the scene to protect the contents…and because one of the things found on the beach was a human skull.

While she is there, she intervenes when a local tries to walk off with a box of goods. Surprisingly, the man attacks her, knocking her unconscious. Another local leaps to her defense, beating the attacker viciously. Both Shephard and her attacker are taken to the hospital in the same ambulance, but on the way her attacker stops breathing and Shephard performs CPR to save his life.

Symon approaches her story at a much slower pace than many other authors choose. Even though this is not the first book in the series, the first several chapters help us to get to know Shephard the person more than Shephard the detective. We meet her boyfriend, her roommate, and her parents. Shephard is off for a week after her concussion on the beach, and we see each of these relationships in both their strengths and weaknesses. Her relationship with her boyfriend takes a dramatic turn, not necessarily for the better. Her mother is a piece of work. I personally thought this was a real strength of the storytelling. A criticism, fair or not, that many genre writers receive is that they are more focused on the procedure than on the characters. At one point I questioned whether I was reading a mystery or a family/relationship novel.

Of course, the logical answer is that it is both. And both are done very well.

Once Shephard returns to work, the mystery begins to take shape. A body is found in the water, and Shephard is named the chief investigator for the crime. Questions arise though, Is this body somehow related to the shipwreck? And when Shephard’s assailant disappears, what connection (if any) is there to the body from the ocean?

I absolutely love the way the book develops. It does not feel like the American procedural novels or television shows. This is not resolved neatly in an hour. Shephard takes some down time to recuperate, just as someone with a concussion would need to do in real life. Tests take days or even a week or more to come back. Communication is sometimes difficult, interpersonal relationships challenging, even good people don’t always see eye to eye. People get injured, sick, afraid, angry. People make judgment calls, sometimes the wrong ones. It is messy and very, very human.

Containment does not read like an American police procedural, and that is a breath of fresh air to me. I have nothing against American novels. I am an American. But reading one that approached the genre from a different sensibility was delightful. 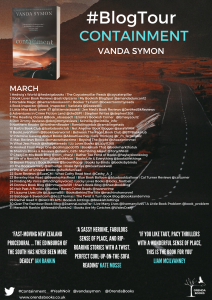 We want to thank Anne Cater for inviting us to participate in the blog tour for this re-release of Containment. Thanks also to author Vanda Symon and publisher Orenda Books for providing us with a copy of the book, solely in exchange for an honest review.