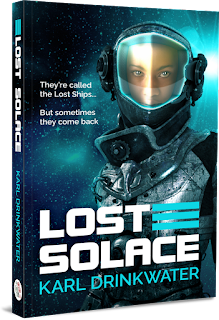 Opal is on a mission. A former member of an elite military intelligence division (IFS), she has deserted and stolen a sentient AI ship, which she has hacked to support her instead of the IFS. Now she and the ship, which she calls “Clarissa,” have entered the cloud surrounding a neutron star, near the point where the gravity of the star would be too strong to escape.

Hidden within this cloud of interstellar debris is a ship, colloquially known as a “Lost Ship.” These lost ships are the subject of secrecy, myth, and disinformation. They may also be the answer to a mystery that has haunted Opal for almost half of her life.

Aboard the lost ship, Opal must contend with numerous strange and alien forces as well as human military personnel who have tracked her to the neutron star. She must also sort out her relationship with Clarissa, who is more than just a ship but who may still have a backdoor in her programming which could lead her to betray Opal. Clarissa has a personality and a friendly voice, and seems to “care” for Opal (if an AI can care for someone). But is all this a ruse to help the government recapture Opal–or worse?

Karl Drinkwater has created two very memorable characters in Opal and her AI companion/ship. Seeing their relationship evolve, exploring the dynamics of a newly sentient synthetic intelligence coming into its own, and the two of them sorting out the kind of relationship they will create, is fascinating. Clarissa feels different without being alien, much as I suspect a human-created machine intelligence would be. The reactions expressed by the ship are uneven, as though it were trying on emotions for size and fit. Opal and Clarissa waver between unequivocal trust and uneasy alliance. Yes, this is a sci fi with aliens and space battles and plenty of weird stuff happening. But at its heart this is a story of two friends who are figuring out just how deep their friendship goes. It just so happens that one of these friends is human and the other is a self-aware space ship.

Lost Solace is the first in a series of novels, and it is an outstanding entry point into a dark and often cruel universe. Opal and Clarissa make an amazing team: strong, intelligent, decisive, adaptable, determined. Alone they are formidable. Together, they may be unbeatable. Do not stand between them and their goal. You will be sorry.