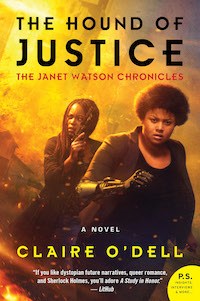 Things are looking up for Janet Watson. Her new cybernetic arm will allow her to return to surgery once she has mastered using it. Her job at Georgetown Hospital pays well and allows her to mentor young doctors. She has met a lovely bookstore owner who just might be that special lady. And even her white neighbors no longer look askance at the black women who live in the beautiful home.

There are some troubling notes on a personal level. Her grandmother has developed Alzheimer’s. It is taking longer to master the use of her new arm than she had hoped, and hospital politics are sometimes treacherous. And her roommate Sarah Holmes is suspended for her actions during the events which we read about in the previous novel. Still, things are generally going well.

Then, the inauguration of the new president is interrupted by a terrorist attack. Watson is near the scene, helping victims and performing triage. Holmes is called back to investigate the crime. Her investigation leads her to the new confederate states, a group of states in rebellion against the U.S.

And Holmes disappears into the heart of the confederacy.

Holmes’s cousin Micha asks Watson to help rescue Holmes. Of course, Watson will not let her friend down. But what can a one-armed surgeon do?

Plenty. But you should read it for yourself!

Claire O’Dell really deepens the character of Watson in this book, as well as introducing more members of Holmes and Watson’s extended family and circle of friends. Watson Is shown to be resilient and resourceful, characteristics which were evident in the first book but which are shown in greater depth in this second novel. Holmes is almost a supporting actor in this book, off stage for much of the action. We see a Watson who is sometimes petty and venal, sometimes bold and wise, loving and selfish, devious and faithful. In other words, we see a fully rounded character with both flaws and virtues that make her an absolute joy to read.

O’Dell again pays tribute to Doyles’s creation without being bound to the details. Setting the book in a dystopian future with black female main characters (and Watson, at least, being lesbian), O’Dell makes Holmes and Watson her own. The story delves into contemporary racial, LGBTQ+, and political themes, but never gets preachy or pedantic. Rather, it is a great story written with great characters who take a classic into a new direction.