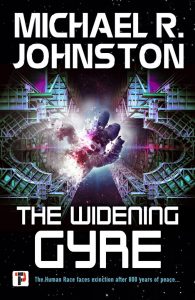 One of the cool things about participating in a blog tour is being introduced to an author I have not read before. The danger, of course, is that I will feel the need to start exploring the back catalog of said author. I don’t know whether it is fortunate or not that Michael R. Johnston does not have a huge back catalog for me to either get lost in or spend all my money on. What he does have, The Widening Gyre, the first book in his Remembrance War series, is the introduction to the universe, the characters, and the settings I so enjoyed in the sequel.

Tajen Hunt was not always a trader. A human who rose through the ranks of the reptilian Zhen military, he was actually named a “Hero of the Empire” for saving a planet during a war. Later, though, he lost the battle for another planet, a human world in the Zhen Empire, and resigned from the service in shame and some disgrace. He was still a Hero of the Empire–after all, the planet he saved was Zhen while the planet he lost was human. But much of his lustre dimmed among his own people, so for years he had tried to live anonymously as an ordinary trader in the backwaters of space.

Fate and family intervene to change his course. First, he finds and rescues the crew of an old friend, another human comrade-in-arms from his time in the Zhen military. One of her crew is an extremely handsome man, Liam, who immediately captures the attention and fascination of Trajen. Then he receives an urgent but mysterious message from his long-estranged brother. When he arrives at their family home on the Zhen homeworld, he discovers his brother has been killed and that he is now responsible for his niece, a young woman who is an extraordinary computer programmer/hacker. They have to flee when the people responsible for his brother’s death start coming after them.

What follows is a chase across the galaxy, connections with aliens and humans that come with their own host of complications, and a fun story with complex characters who live and laugh and love with enthusiasm.

Johnston has taken the best elements from the old masters of space opera and created a fresh and fun story. The romance between Trajan and Liam is sweet and complicated (and if you cannot handle reading about two men falling in love, save yourself and the rest of us from your outrage and don’t read the book). The family dynamics between Trajan and Kiri, the niece he had not seen in 15 years, are sometimes tense and sometimes heartwarming. The almost brother/sister bond between Trajan and Katherine, his one-time comrade and current colleague, is fraught with both tension and tenderness.

But the fun in the story is in the battles and the bouncing around space. Trajan is a pilot and a commander. Leading a crew into war is what he does, and he does it better than almost any other human or Zhen. And when the fight is for the soul of humanity and for the restoration of Earth, there is no one you would rather have on your side. Whether it is escaping long odds and fleeing a host of enemy ships, or whether it is a mission almost certainly doomed to failure but needing a chance in ten-million to succeed, he is the man for the hour. Captain Kirk, take a seat. Captain Malcolm, relax. Luke, your Jedi powers are not needed here. Trajan has some work to do, and he is going to get it done.

And whether in love or war, he always gets his man!