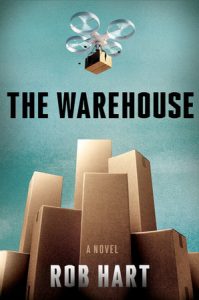 Some dystopian future novels sound improbable at best. Climate change combined with a global epidemic fueled by alien robot overlords or something like that. They make for great stories, but there is some built-in distance. You know these things could happen, but the combination of them is somewhat unlikely.

Rob Hart’s The Warehouse is different. Very different. I feel like this novel could happen next Tuesday.

Two main characters drive the story. Paxton is a former entrepreneur, an inventor whose company was destroyed by “Cloud,” a giant corporation that delivers every product imaginable to anyone in the world at any time. Unable to find any other kind of work, Paxton applies to Cloud. In a difficult economy, you take any job you can find–especially if it is one with the largest company in the world, working for the richest man in the world.

Zinnia also applies to work at Cloud. She is a professional industrial spy, an expert in infiltrating companies and uncovering their secrets. She has been hired by a mysterious employer to find out what powers the Cloud’s warehouses and other buildings. The Cloud receives millions of dollars in tax breaks for their green energy use, but Zinnia’s employers suspect the company is not as green as they appear to be.

Paxton is rather naive, besotted by Zinnia, and thus a perfect foil for her subterfuge. But what they both discover while working for the Cloud is different than anyone expected.

Interspersed throughout the book are blog posts by the founder and CEO of Cloud, sharing his perspective on what makes Cloud so great and his perspectives on life as he nears the end of his. Occasionally the juxtaposition of those rosy and cheerful dispatches beside the gritty realities faced by Paxton, Zinnia, and the other Cloud employees is jarring. Cloud is a soulless machine, devouring its workers and destroying their souls. The beams of light coming from the owner serve to illuminate just how dark his world is.

The Warehouse takes everything you’ve heard about working for certain gigantic corporations and ramps it up by a scale of 100 or more. It is an unapologetic commentary on the effects of uncontrollable cyberbusinesses on the economy, government, and humanity. It is also a good story written by a thoughtful author (who’s from Staten Island, the hometown of Scintilla’s visionary leader). I thoroughly enjoyed it–and was thoroughly terrified by it.