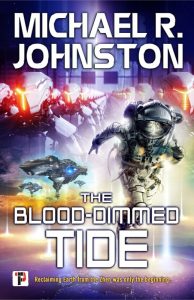 I fell in love with Asimov and Heinlein, Anderson and Niven, and many more of the science-fiction writers of the last century when I was a child. I immediately was sucked into the gravity well that existed by the sci-fi shelves at my local library. I could spend hours there. More than once I wandered off from my parents in the mall, only to be found in one of the bookstores seated by the sci-fi section and inhaling the contents of a new paperback or an old classic.

The Blood-Dimmed Tide by Michael R. Johnston brings back the best of those reads. It is a space opera of the classic style, with spies and battles, aliens and spaceships, and a fight for the right to exist on planet Earth. It starts with a wedding between two men who met in the first book of this series, The Widening Gyre (which we have not yet read but now feel we must!). They barely conclude the ceremony when all hell breaks loose. Attack follows attack, battle follows battle, and our heroes and heroines must cross the galaxy to shore up alliances, weaken adversaries, and bring the human diaspora back home.

For some eight-hundred years, the Zhen empire has held humanity in thrall. Now, finally, humans are beginning to throw off their yokes. But it will not come easily. There is much blood to shed, many lives to be lost, and the stakes are merely the survival of our species. In Tajen the humans finally have a military commander who can take the fight to the Zhen. With his husband, Liam, his niece, Kiri, and the rest of his team, the fight for Earth is finally one where the humans have a chance. Not a great chance. Not even a good chance. But a chance.

I was once told that a novel should throw everything but the kitchen sink at its protagonist(s). I don’t know whether I believe that, but Tajen and his family/team do confront almost everything imaginable. Strange aliens? Check. Uncertain allies? Check. Betrayal? Check. Injury? Check. Battle? Check. Running for their lives? Check and check and check again. They do manage to avoid any flying kitchen sinks…but there is a sequel coming, so who knows?

Perhaps the best part of this book is the dialog and relationship between the characters. I could perhaps wish for the aliens to seem more alien and less human…but I don’t really know what aliens would sound like, either, so that isn’t a valid criticism. Regardless, the zingers are plentiful, the comebacks are quick, and the affection is authentic. Especially within the family unit of Tajen, Liam, and Kiri, sarcasm and teasing and honesty and vulnerability come through quite well. None of them are perfect, each of them has flaws, and all of them are close enough to call the others out on those flaws. At times it reminded me of Aaron Sorkin’s The West Wing dialog, which is one of my favorite shows.

Another nice thing about the story is its length. I read it on my phone in an afternoon. The paperback copy has 288 pages, according to Amazon. Given that many authors seem to be trying to outdo each other with 700+ page tomes that put the brevity of my old encyclopedias to shame, it was delightful to get lost in a story and be rewarded with the conclusion in a single day. Not that the conclusion really concluded the story. There is much more to tell, and a sequel is hopefully coming soon.

All in all, this was a great way to spend an afternoon. A good story, lots of action, likable and believable characters, excellent dialog, and just a lot of fun. Michael R. Johnston has jumped into my list of authors that I want to read more from, and I am looking forward to doing just that. 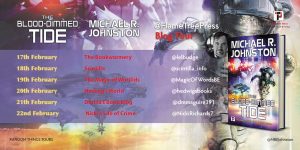 I want to thank blog tour coordinator Anne Cater, publisher Flame Tree Press, and author Michael R. Johnston for giving me a copy in exchange for an honest review. This book was a lot of fun, and I thoroughly enjoyed it.