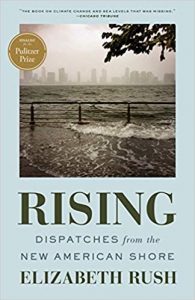 One reviewer calls Rising: Dispatches from the New American Shore “the book on climate change and sea levels that was missing” (Chicago Tribune). I cannot think of a more apt description. This book is elegiac, mesmerizing, and heartfelt. Elizabeth Rush’s writing is exquisite. She is a reporter, a listener, an observer, a teller of stories. Her work reminds me of Annie Dillard and of Robert MacFarlane, yet it is uniquely and completely her own.

Rising tells of the reshaping of America’s coasts by rising sea waters. Sea levels have risen due to climate change, and so far we have only seen the beginnings of what promises to be a breathtaking transition affecting the entire country. Rush does not focus on the science involved. This is a book about the effects on people, on communities, on nature. It is the loss of place, the loss of livelihood, probably soon the loss of entire species that shows what is happening.

Rush is not an impartial observer. She does not pretend to be. She loves the land, she loves the plants and animals, and she loves the people. Whether she is in Rhode Island, Staten Island, Oregon, Pensacola, Lake Charles, or anywhere else, she listens and watches. She shares the emotions of people fighting to save their communities–and the emotions of those who realize they’ve already lost and are relocating to higher ground. She laments the loss of wetlands that migratory birds require, and the changes already seen in their behavior, their size, their populations, and their diets. She notices that spotted owls in Oregon are abandoning their former territories and moving to higher altitudes, likely in response to higher temperatures in the valleys. She looks at rampikes, the skeletons of dead trees, killed by encroaching salt water, and mourns the loss of an entire habitat. And she looks at the effects humans have had and continue to have–roadways that prevent plants from moving away from the sea, drainage ditches that emptied wetlands and now allow oceans access, dessicated rivers that die before reaching the ocean.

She also gives voice to some of those most affected by the encroaching seas. The daughter of a man killed on Staten Island during Hurricane Sandy. A Native American whose ancestral home has almost disappeared under water in Louisiana. An African American who has experienced discrimination all of her life, and cannot help but think that climate change is another opportunity to oppress the poor. This woman sees the effects of rising sea levels, but she has no reason to trust that the government or anyone else actually has her interests at heart.

Rush concedes that much of the battle has been lost, though few are ready to acknowledge our defeat. Efforts to hold back the sea are temporary at best. Ultimately the answer is to retreat from the coasts. Some have already started doing this with governmental help. Parts of Staten Island, devastated by Hurricane Sandy, have been razed and are being returned to nature. Residents of Louisiana are being relocated en masse as their island is submerged–except for a few holdouts who cannot bear to leave their homes despite the danger.

Others continue the fight against the waves. In the San Francisco bay, seawalls and levees complement the restoration of wetlands in an effort to protect low-lying neighborhoods of Silicon Valley. New developments and remodeled homes in Miami include stilts. Of course, that is if you are wealthy. Poorer neighborhoods continue to flood, sometimes when it is not raining. Wealth buys you a place on the hills, above the waters, on the stilts, in the interior, away from the dangers of storms and floods. Poverty leaves you wading through streets during sunny days, enduring mold devouring your walls, watching the very land your ancestors walked over washed away.