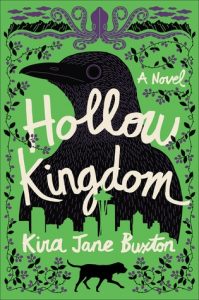 I am not sure how to begin describing a book one person called a mash-up of The Incredible Journey and Dawn of the Dead. The apocalypse has come. Humanity is done. Over. Finito. Kaput. Good-bye, people. Hello, animals.

S.T. is a foul-mouthed domesticated crow, living with Big Jim (his human) and a dim-witted bloodhound named Dennis. S.T. likes arguing with the wild crows, watching TV, and gorging on the finest food ever created: Cheetos®. Then, Big Jim’s eyeball falls out of his head, and something is obviously terribly wrong with the human. After plying Big Jim with his usual treatments of beer, hot pockets, and licks from Dennis, S.T. becomes desperate. A trip to the pharmacy reveals that it is not just Big Jim. All humans are affected. They are eating each other, eating their pets, eating the wildlife, and generally behaving in very non-human ways. S.T. procures a number of remedies that should heal Big Jim: Dulcolax, Summer’s Eve, and other random things that look good to a crow’s eye. None of them seem to help. So, S.T. and Dennis set out to find help.

What ensues is a poignant and hilarious romp through a Seattle that has lost its humanity–and literally lost its humans. S.T. consults with a wise octopus. He befriends some of the wild crows he once disdained. He and Dennis begin rescuing other pets that were trapped in their homes after their humans got sick. They face threats from escaped zoo animals, wild animals that have begun encroaching on the urban jungle, and from the sick remnants of humans which have begun to transform into something even more terrifying. Throughout, S.T. maintains a commentary that is profane and vulgar, yet steeped with longing and appreciation for the best things of humanity that were lost. Beer. Cheetos. TV.

Who would have thought that the best commentary on people would come from a crow?

Buxton is a fresh voice with a compelling story told in a creative way. It is madcap and thoughtful, a hero’s journey from a most unlikely pair of heroes. S.T. and Dennis wend their way through a broken Seattle and into your heart, and their triumphs and tragedies celebrate life and love and loyalty as much as any crow/bloodhound pairing you’ve ever met in literature or reality. I laughed and occasionally cried as I read this book. Truly a delightful novel.