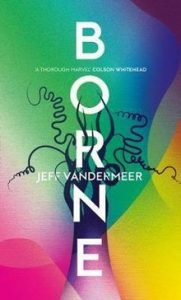 Jeff Vandermeer may be a perfectly delightful and ordinary person, but his writing is as strange as it gets! The Southern Reach trilogy was a fantasy/sci fi amalgam that zigged and zagged in so many directions that it took my breath away. With Borne, the brilliance continues to amaze, as does the weirdness.

Rachel is a scavenger, surviving on the detritus of a city destroyed by climate change and by uncontrolled and uncontrollable biotech. Along with her partner, Wick, Rachel looks for food and for usable biotech that they can repurpose or use to survive another day. Among the dangers she faces are the minions of an invisible magician and the predations of a giant flying bear.

One day she finds a small lump of…something. It resembles a sea anemone from the island nation where she grew up, a nation lost to the rising oceans. Unsure of her reasons, she brings it home and names it “Borne.”

As Borne grows, it begins to change the dynamics and relationships around it. Wick and Rachel fight about what to do with it. Borne begins traveling into the city, and soon strange rumors begin circulating. But Rachel is enamored with her Borne. She loves it like a child. She accepts it as a person. And she defends him, until a crisis point arrives that turns the tables.

Vandermeer’s stories are strange, but they are well crafted and powerful, full of characters with depth and passion. Admittedly I do not always understand what I am reading, but I enjoy the thrill ride he takes me on. I look forward to reading the other Borne books, and seeing what strange worlds remain to be explored.