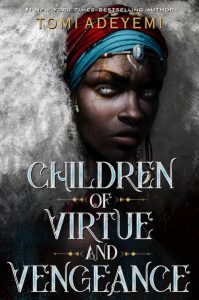 YA Fantasy: Children of Virtue and Vengeance, Tomi Adeyemi

Last year we reviewed Children of Blood and Bone, the first book in this fantasy series by Tomi Adeyeme. The sequel, Children of Virtue and Vengeance, takes the characters on a far different journey.

It’s hard to review a sequel without giving away spoilers from the first book, so if you are unfamiliar with the first book, stop and go read it. Right now. You’ll thank me. It’s that good. The sequel is equally good, but very different and in some ways much darker.

Zelie has succeeded in her quest to restore magic to the kingdom of Orisha, but the price of success has been terrible. Both the rulers and the formerly oppressed maji now have magic. A war has broken out that pits brother against sister, lovers against each other, and threatens to destroy the kingdom in its devastation. Some will stop at nothing to achieve victory. Power is the ultimate goal. No weapon, no relationship, no ethic, no casualty can stand in the way of success.

Adeyeme never gets preachy, but her novel raises interesting questions about the ways that power and power imbalances rot a society. Can any society survive when its people are oppressed? Can anyone achieve power without destroying those who oppose them? What price would we pay to win?

The characters in Adeyeme’s books are complicated. In one chapter they are vulnerable, seeking love and acceptance. In the next, they are cold and violent. Yet Adeyeme pulls these contradictions off flawlessly. Her characters are human, damaged themselves and damaging others. They make emotional decisions, and often they are the wrong decisions. Sometimes genuinely good people who share common goals make terrible mistakes because their vision of the future blinds them to the needs of the present. Sometimes, those mistakes have fatal consequences. How much pain can one forgive if the pain was inflicted to achieve a noble purpose? How much cruelty can one accept if it was inflicted to achieve a greater good?

Ultimately, must one become like the enemy to defeat the enemy?

These characters are young, and the books live on YA shelves in libraries. Don’t mistake them for children’s books, though. Adeyeme’s writing is powerful. Teens will love seeing themselves in the books, but adults will love the vivid characters and the complicated decisions they face. Adeyeme is a force to reckon with in contemporary SFF. Her books envision a world where change is inevitable–but giving birth to a new world comes with blood and tears and pain and loss. Children of Virtue and Vengeance, like its predecessor, is a whirlwind that will sweep you away.