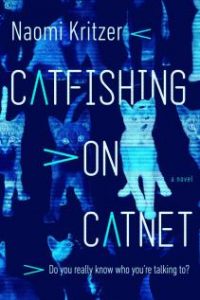 Steph is used to starting over. Her mother has been on the run from Steph’s abusive father for as long as Steph can remember. She’s been to five high schools…and she’s still just starting her junior year. So when she winds up in a small Wisconsin town, she expects to have to read The Scarlet Letter again. She knows she will be the new kid again. She does not expect to find any real friends.

Her real friends are online, part of the Catnet group. Ostensibly a chat room for sharing cat pictures, she has become part of a small group within the larger community. Her group is apparently all teenagers, monitored by someone called “Cheshire Cat” (or just “CC”). Those friends accept her for who she is. They know she is on the run, they know she cannot put her selfies online or reveal her actual location or divulge her real name. And they are cool with that. Online they can be themselves.

Wisconsin proves to be a different stop for Steph, though. To her shock, she does find a real friend. Two, in fact. That’s the good news. The bad news is that her mother becomes terribly ill and is hospitalized. And while her mother is in the hospital, Steph’s father finally learns where she is.

Naomi Kritzer has written a young adult book with great appeal to this not-so-young adult. Steph is a delightful character who is discovering herself throughout the story. She does not know whether she is gay or straight or something else. She does not know really who she is or what she wants to become. Her entire life has been in constant motion, moving from place to place, creating no attachments, leaving everyone and everything behind at the slightest sign of trouble. I love that a young woman does not fully know herself at age 17. I am still learning about myself and I have 36 years on the character!

This should not be read as a cautionary tale, although wise readers will absorb how easily predators can use social engineering to stalk people. Rather, it is a story of discovering oneself, creating one’s own family, and finding belonging in unlikely places. It raises questions about sexuality, about artificial intelligence (AI), about the internet, and provides some answers and some food for thought. The book models acceptance, not just of who someone is, but of who someone is becoming, of who they might be, of what they don’t know.

Too often books (and people in real life) value certainty. I value questions and discovery. I am not the same person I was when I was 17, or 27, or 47. I will probably be different still when I am 60. Yet I still have friends from every stage of my life, people who accept who I was, who I am, and who I am becoming. They may not like every stage, but they love me. Like Steph discovers, that is the greatest gift of all.