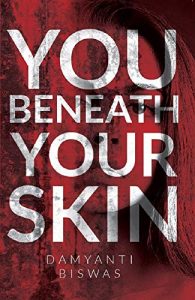 Fiction: You Beneath Your Skin, Dimyanti Biswas

You Beneath Your Skin starts out as a family drama. Anjali is the single mother of a troubled autistic teenager, Nikhil. She is living with her friend Maya, and secretly having an affair with Maya’s married brother. Jatin’s marriage is unhappy but he dotes on his son, Vardun. Jatin is high up in the New Delhi police department; however, he reports directly to his father-in-law, so divorce is not an option.

This family drama becomes enfolded in a police investigation. Women are being drugged, raped, and killed. Before their bodies are dumped, their faces are burned away with acid. Jatin becomes personally involved in solving this case, but it is not a high priority for the police department. Therefore he enlists the help of Maya, who is a private detective, and her team which includes Anjali.

Without giving away any spoilers, the case takes a very personal turn for all of the characters, and the pursuit of the suspects both brings the characters together and tears them apart. Biswas has created a remarkable plot, full of twists and turns and surprises. She takes an unflinching look at the challenges faced by women in India, corruption within the police and political classes, prejudice toward people with differences and disabilities, and the consequences of secrets and lies. Everyone is touched and everyone is damaged.

Biswas has studied firsthand the victims and survivors of acid attacks. India reports over 300 acid attacks on women every year, but some suspect the number could be closer to 1000 as many go unreported. Acid is a way of erasing a woman. Often the target is someone who has also been raped, an attempt to intimidate the victim further so she will not identify her attacker(s). Many die from these attacks. Others are blinded or disfigured. Despite laws against selling strong acid and punishments of up to 10 years in prison for attackers, the violence continues and few are arrested or convicted.

You Beneath Your Skin is a sometimes harrowing story. Biswas has committed the proceeds from the book to helping victims of acid attacks, and the story itself successfully shows both the permanent effects of acid attacks and the power of those who survive these horrific assaults. It is a gripping read, one that will stay with me for a long time to come.

One thought on “Blog Tour: You Beneath Your Skin, Dimyanti Biswas”