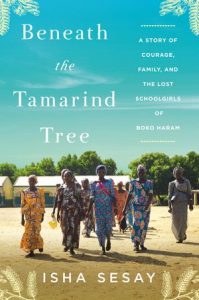 Former CNN journalist Isha Sesay covered the story of the kidnapped girls from Chibok, Nigeria from the beginning. In April, 2014, gunmen from Boko Haram attacked the small town of Chibok. One of their targets was the school. Boko Haram, a radical Islamist group, is particularly opposed to girls and women receiving an education, and the Chibok school housed several hundred young women as boarders for secondary education. Over 200 girls were taken by their kidnappers that night. Most of them remain missing almost six years later.

Sesay’s reporting is both thorough and deeply personal. She cares about these girls, identifies with them as sisters from Africa, sees their desire for education as a mirror of the journeys taken by her own mother and herself, and recognizes the Boko Haram as an enemy to all women who seek to better themselves and choose their own lives. She reminds us through the power of her words of the old journalism school mantra: If one person says it is raining and another says it is sunny, it is not a reporter’s job to restate both positions. A reporter’s job is to look out the window and see what is happening. In these days of “both sides” and being held prisoner to the moment, Sesay chooses to pursue the truth.

Beneath the Tamarind Tree is also part memoir. During this same time period Sesay’s mother collapsed from a brain aneurysm. Her biggest cheerleader and best friend, Sesay shares her own terror and loss at the thought of losing her mother permanently. As of the book’s writing her mother continues to cling to life, but it is still a day-to-day battle that she faces.

This personal trauma helps Sesay identify with the tragedy of the Chibok girls. They too lost their families, their friends, their school, their church, and everything they held dear. In exchange they lived in constant fear, guarded by violent and armed men, compelled to listen to Islamic teaching and ordered to convert or face death. Many of the girls, facing unimaginable horror, did convert and were then forced to marry Boko Haram fighters. Many of the other girls found the internal strength to refuse, but then suffered from further abuse and deprivation.

Some of the girls have been released. Those girls shared with Sesay the constant terror and abuse they faced during their time in captivity. They were often starved, forced to sleep outside without shelter or blankets, living in fear both of their captors and of the Nigerian military whose air bombing campaigns against Boko Haram also threatened the lives of their captives.

Sesay also addresses head on the political, racial, and social issues that have hurt efforts to rescue the girls. She asks whether a similar act against Americans would be allowed to continue for so many years. The Chibok girls were from poor families. They are from Africa. They are from small towns in rural areas. They have no economic or political power. And they are inconvenient reminders of the failures of the Nigerian government to protect its own people. Thus, the Nigerian government would prefer to pretend the problem has been solved (or never existed at all), and most westerners have moved on to other stories closer to home. Meanwhile, six years later, many of the girls kidnapped that night remain trapped in a hell they never chose.

The hashtag #BBOG (Bring Back Our Girls) went viral a few years ago. However, like a momentarily unpleasant cold, the virus has moved on. Perhaps the only real hope the remaining captives have is that a few committed people, people like Isha Sesay, have not forgotten. After reading this book, I hope that I also never forget the girls of Chibok.