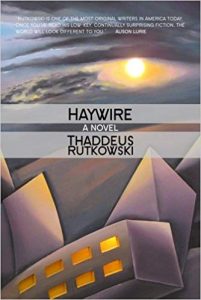 I read an interview with author Thaddeus Rutkowski in which he described his work as “autobiographical fiction.” He also mentions the term “autofiction” in that same interview. His novel Haywire, originally published in 2011 and rereleased in 2019, strides the line between autobiography and fiction. Told in a series of vignettes, each a standalone story in its own right, it covers the life of a Polish-Chinese-American boy growing up in central Pennsylvania, attending college away from home, and finally moving to the big city (New York). It tells of a challenging childhood with troubled family dynamics, racial discrimination from both whites and Asians, and a deep desire to belong. And it refuses to sugarcoat or flinch away from difficult passages of adulthood: fetishism, drug use, group therapy. It also includes some dream sequences which may (or may not) reveal even more about the protagonist.

The wrong question to ask is “what is fiction and what is fact?” Rutkowski blends them seamlessly and effortlessly. Whether it is all fact, all fiction, or all a woven tapestry of the two is irrelevant. What is important is recognizing the willingness of the author to plumb the depths of his own life and character in a humorous and touching way. Rutkowski is the son of a Polish-American father and a Chinese-immigrant mother. He did grow up in central PA. He went to school away from home, and eventually settled in New York where he and his wife have a daughter. These facts about his life all parallel the main character in Haywire.

What makes this novel so powerful is not that it is autobiographical in nature. What makes it powerful is the earnestness and longing it expresses. The character is a product of multiple worlds yet fully embraced by none of them. He is the weird kid at school, the non-white boy in a mostly white community, the non-Asian cousin among his Chinese relatives. His relationship with his father is difficult. He experiments with drugs, sex, and finds that nothing seems to gain him access to the family or community he is seeking. Then, finally, he finds a partner who accepts him for what he is, they have a daughter who (like all daughters) loves him and thinks he is embarrassing, and finds in those relationships an anchor for his desires.

I don’t need to know all of the particulars of the author’s life to know that his character is deep, reflective, and bold. His protagonist reveals his strength through what he has endured, overcome, and used to forge his mettle. Any writer willing to take us on that journey with grace and whimsy is one worth reading.

Rutkowski also describes his work with the word “fractals.” There is not a traditional plot to this novel. It could be read as a collection of short stories surrounding the same life. That is why I am not afraid that “spoilers” will ruin the book for you. Nothing I could say would spoil the book in that way, nor would it prepare you for the power and grace of Rutkowski’s prose. He may not be everyone’s cup of tea, but it is a strong and sweet tea that can be savored or gulped as the reader chooses.

For more on Thaddeus Rutkowski see:

Haywire was a finalist in the fiction category of the Asian American Literary Awards, and it won the Members’ Choice Award.