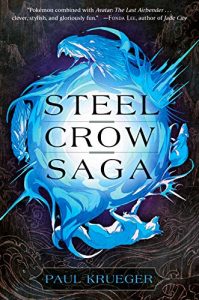 UPDATE (6/28/2020): Since the publication of this review, author Paul Krueger has been accused of extremely troubling behavior toward women, particularly women of color. He has issued an apology of sorts. It is not our place to accept or reject his apology. We believe women who report harassment and we would not have published a review of this author’s book had we known then what we know now. However, we did read it and we did publish the review and the book as a book is good. The author as a person…well, you must draw your own conclusions. If you can separate the book from the creator (admittedly an advantage of privilege and of not suffering personally from sexual harassment) then perhaps read a library copy. If you cannot separate the two then you will not want to read this book. Despite loving the book and enjoying the Filipino connections, we can no longer recommend purchasing works by this author. David and Maria Marvin.

Steel Crow Saga has been described as Pokemon meets Last Airbender. I doubt I could come up with any description close to matching that. It is a wild fantasy ride through an Asia that shares certain cultural aspects with the continent we know (food, clothing), but includes shade-casting and other magical and mystical elements. It also has all of the historic enmities and regional disdain we see between countries in our Asia. Working through and beyond those cultural misunderstandings becomes a big part of this epic fantasy novel.

Shadecasters are people who have bonded part of their soul with the soul of an animal. That animal then “rides” with them, available upon summons to assist the shadecaster in time of need. Often that need involves fighting. The animal shades bear the basic form of their original animal, and also retain some aspects of memory and personality. But the shades are also usually much larger than their living counterparts: rats larger than men, spiders the size of wolves, dogs larger than bears. The shades cannot be killed, but they can be defeated and forced to return to their caster to recover. If the shadecaster is killed, his or her shade also dies.

Metalcasters have power over metals. They can heat water by touching the pan. They can drive cars without engines. They can shoot guns with perfect aim, willing the bullets to hit what they intend. Metalcasters generally despise shadecasters, calling them “slavers” because of their use of an animal’s living soul rather than inanimate metals.

Krueger is a Filipino-American, and I was delighted to read one of the main characters call her older brother “Kuya,” which is the same thing my Phil-Am wife and her sister call their brother. Adobo also finds its way into the story, driving home the author’s connection to some of the most wonderful food in the world! Although no contemporary or historical countries are named, the setting certainly parallels many areas in southeast and east Asia, and more than just Filipino descendants will be able to see themselves in this novel. The novel also features several strong female characters, and gay, bisexual, and trans characters are prominent both among the protagonists and among secondary characters.

All in all this was a delightful novel. Krueger has an involved and actively moving plot, his characters are deep and grow through the story, and there are enough twists and turns to keep things moving. Many people will see themselves among the characters in the book, and the characters are complex and interesting and surprising. This saga may or may not have a sequel coming, but it stands very well on its own and is a wonderful entry into the fantasy genre. I loved it.