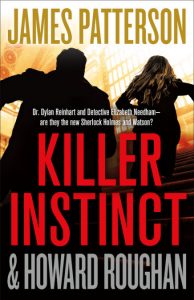 Dr. Dylan Reinhart is a professor at Yale. Detective Elizabeth Needham is with the NYPD. Together, they are a criminal’s worst nightmare.

In this latest appearance from the duo, terrorists have attacked Times Square in Manhattan. Reinhart is frantic to get home: his husband and their daughter were supposed to be visiting the Disney store in Times Square at the time of the attacks. Needham has also rushed back to NYC to help with the investigation. Soon the two are working together again, looking for an elusive mastermind coordinating multiple terror cells. They are also drawn in to the investigation of a murdered MIT professor. Was his death related to the attacks? If so, how? And what is the role of an enigmatic NYU professor in any of this?

Reinhart and Needham have an almost brother/sister bond with each other. They can drive each other crazy, but there is tremendous affection between them as well. When things are difficult, each is the other’s first call.

Like every James Patterson book I have read, the chapters are very short and filled with action. This is not a criticism on my part: it works very effectively as a technique to keep the action moving and the story developing. The result is that a relatively thick book in terms of the number of pages actually is a relatively fast read.

I enjoy Patterson, and this outing with Howard Roughan definitely makes me want to look him up as well.  And as much as I enjoyed these two characters, I suspect that I will be looking up others in the series. Don’t worry: you won’t need two detectives as outstanding as Needham and Reinhart to find out. I’ll post it right here!